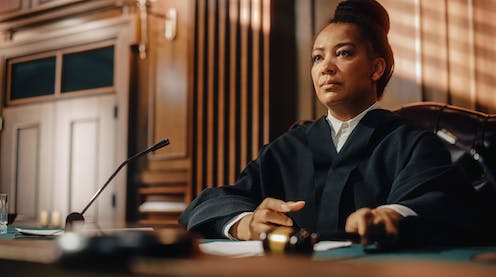 Despite substantial gains[1] over the past half-century in the numbers of women working in law, medicine and business in the U.S., the elite ranks of these professions remain male dominated[2], a phenomenon often referred to as the “glass ceiling.”

In corporate America, male executives outnumber women[3] 7 to 1 – and CEOs, 17 to 1. In the judiciary, only about a quarter of federal appellate judges are women[4], even though half of law school graduates are women. Because of this lack of diversity, powerful decision-makers may only rarely collaborate with female peers[5].

This lack of interaction may reinforce biases[6] – both explicitly held prejudices and implicit assumptions, or ones that people may not realize that they are making. Biases held by established professionals who control hiring can, in turn, limit access to valuable opportunities for women who are just starting their careers.

I am a labor economist[7] who studies the gender wage gap and this raised an important question for me: Does working with peers from underrepresented backgrounds lead established professionals to change their attitudes or actions, including making more inclusive decisions when hiring staff?

Working with co-authors Eleonora Patacchini[8] and Marco Battaglini[9], I analyzed the gender gap within the federal appellate court system. We collected data from 2007 to 2017 on which judges heard cases together in each year, and combined it with data on the law clerks that each judge hired. This let us see whether judges are more likely to hire women in years where they have heard many cases with their female colleagues.

In U.S. appellate courts, it is not uncommon for a panel of male and female judges to work together on a case. thepixelchef/E! via Getty Images[10]

The appellate courts[11] offer unique insights into a high-level work environment. Appellate judges review decisions from lower courts to make sure that the law was correctly applied. To ensure fairness, each case is heard by a panel of at least three judges.

These panels are constructed through a lottery system, chosen from a list of available judges. As a result, the colleagues that judges work with do not reflect the judge’s attitudes, preferences or potential biases.

However, each judge chooses their own staff. Appellate judges hire law clerks to do legal research and help write opinions. These clerkships, typically filled by the best-performing graduates from prestigious law schools, are crucial steppingstones to roles in the judiciary and the legal profession as a whole. A judge’s hiring decisions reflect their personal assessment of a candidate’s ability to serve as a clerk – and to honorably represent the judge later in their career.

These key entry-level positions were historically open only to men[12] and remain male dominated. We find that women are still 33% less likely than men to land an appellate clerkship. That’s not due to a lack of interested female applicants – we found that women were about 50% more likely than men to get slightly less prestigious clerkships in federal district courts.

Our study found[13] that men were much more likely to hire female clerks in years when they had worked with more female colleagues. We estimate that when male judges worked on 30% of cases with women – rather than 20% – their likelihood of hiring a female clerk jumped by seven percentage points. This difference is statistically significant at the 0.005 level.

This suggests that diversity at the top of a profession can profoundly benefit those at the entry level. We estimate that increasing the prevalence of female appellate judges serving on the bench by just 16% – from the current 25%[14] to 41% – would completely eliminate the gender disparity in appellate clerkships.

President Joe Biden has appointed a historically diverse slate of federal judges, including the nation’s first Black female Supreme Court justice[15]. This administration’s appointees are far more diverse than those of any previous president[16], including Democratic predecessors: 71% are nonwhite and 75% are women. Our findings suggest that these changes are likely to reshape the courts for generations to come.

While our work focuses on the judiciary, we think this lesson is likely to hold true in most fields. For appellate judges, deciding cases involves teamwork and collaboration that is similar to the collaborative process used in many other professions.

As a result, we expect that if the leadership in most workplaces more closely reflected the makeup of the U.S. – with more women and more racial, religious and ethnic representation – diverse young professionals would have better opportunities in law, business, science, medicine and beyond.