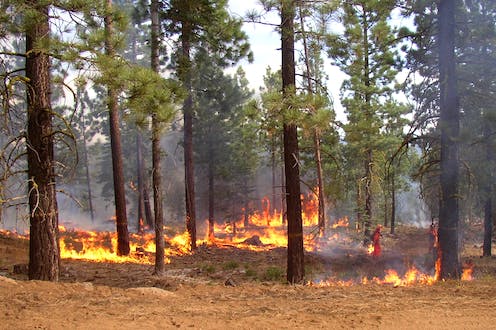 People living in the western U.S. have been concerned about wildfires for a long time, but the past two years[1] have left many of them fearful and questioning whether any solutions to the fire crisis truly exist.

The Dixie Fire[2] in the Sierra Nevada burned nearly 1 million acres in 2021, including almost the entire community of Greenville, California. Then strong winds near Lake Tahoe sent the Caldor Fire[3] racing toward homes, forcing the evacuation of tens of thousands of people – including one of us. They followed destructive wildfires in 2020 in California[4], and Colorado and Oregon[5] also saw devastating fires in the past two years.

As foresters who have been working on wildfire and[6] forest restoration[7] issues in the Sierra Nevada for over a quarter of a century, the main lesson we gather from how these fires have burned is that fuels reduction and forest restoration projects are our best tools for mitigating wildfire impacts amid a changing climate[8], and not nearly enough of them are being done.

A new 10-year plan announced by the U.S. Forest Service in early 2022 aims to change that. It outlines an ambitious strategy[9], but Congress will now have to follow through with enough funding to carry it out.

The fires spread quickly over vast areas, but both burned less severely in areas with proactive forest restoration and fuels management projects, including near South Lake Tahoe[13] and near Quincy[14].

Fuels reduction projects include thinning[15] out trees, burning off woody debris and reducing “ladder fuels” like small trees and brush that can allow fire to reach the tree canopy. Forest restoration[16] projects focus on forest structure, density and composition as well as reducing fuels.

Thinned areas like this one in California’s Genesee Valley were more resistant to 2021’s Dixie Fire. Ryan Tompkins, CC BY-ND[17]

The Forest Service’s new 10-year plan[20] sets a goal to treat as much as 50 million additional acres across the West over 10 years, just under 80,000 square miles. For comparison, the Forest Service treats around 2 million to 3 million acres[21] a year now.

The first priorities in the plan are high-risk areas where communities have been threatened by out-of-control fires, including in the Sierra Nevada in California, the eastern side of the Rockies in Colorado and parts of the Pacific Northwest and the Southwest.

The Forest Service already has a “shared stewardship” agreement[22] with California, reached in 2020, aiming to treat 1 million acres annually by 2025. Though, research indicates that current levels of treatment are closer to 30%[23] of that million-acre goal. Remember that 1 million acres is about how much the Dixie Fire burned.

A lingering question is how the 10-year plan will be paid for, considering that it will require a workforce larger than the U.S. has seen in decades.

So far, Congress has approved additional funding[25] through the 2021 infrastructure bill, which included about $655 million a year for fire management for five years. That’s in addition to the Forest Service’s annual funding for this work, which was about $260 million this fiscal year.

But in California alone, a group of scientists, land managers and former government leaders has recommended spending $5 billion a year on proactive management, roughly equivalent[26] to what was spent to suppress fires in the state in 2020. Known as “The Venado Declaration[27],” this proposal, championed by former Gov. Jerry Brown and former Cal Fire Director Ken Pimlott[28], calls for addressing forest resiliency on every acre and acknowledges that more than just funding is needed. It also discusses building infrastructure and a workforce and reevaluating regulatory barriers.

To manage fires in an era of climate change, when drier, hotter weather creates ideal conditions for burning, experts estimate that the area treated for fuels reduction needs to increase by at least an order of magnitude[29]. We believe government needs to accomplish these four things to succeed:

During the Dixie Fire, firefighters used an area that had been strategically thinned to set backfires to prevent the wildfire from reaching Quincy. Ryan Tompkins, CC BY-ND[31]

2) Reduce regulations on forest and fuels management efforts for both public and private land. While California[32] and the federal government[33] have made recent strides to streamline regulations, land management agencies need to acknowledge the biggest risk is doing nothing. Agencies need to plan larger restoration projects and drastically cut the time needed to implement them.

4) Provide funds and financial incentives for at-risk communities to retrofit homes to withstand wildfires[34] and reduce fuels around homes, communities and infrastructure.

Amid a changing climate, we will have to learn to coexist with wildfires in the U.S. West. This will require concerted action and a cultural shift in how we view and manage our forests and communities to be resilient.

This is an updated version of an article first published on Oct. 13, 2021.