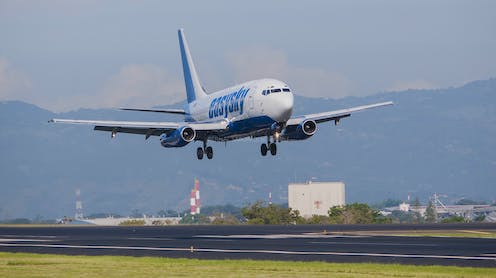 New high-speed cellphone services have raised concerns of interference with aircraft operations, particularly as aircraft are landing at airports. The Federal Aviation Administration has assured Americans that most commercial aircraft are safe[1], and AT&T and Verizon have agreed to hold off on installing their new cellphone antennas[2] near airports for six months. But the problem has not been entirely resolved.

Concerns began when the U.S. government auctioned[3] part of the C-band spectrum[4] to wireless carriers in 2021 for US$81 billion. The carriers are using C-band spectrum to provide 5G[5] service at full speed, 10 times the speed of 4G networks.

The C-band spectrum is close to the frequencies used by key electronics that aircraft rely on to land safely. Here’s why that can be a problem.

Keeping order on the spectrum

Wireless signals are carried by radio waves. The radio spectrum ranges from 3 hertz to 3,000 gigahertz and is part of the electromagnetic spectrum. The portion of the radio spectrum that carries the signals from your phone and other wireless devices is 20 kilohertz to 300 gigahertz[6].

If two wireless signals in the same area use the same frequency, you get garbled noise. You hear this when you are midway between two radio stations using the same or similar frequency bands to send their information. The signals get garbled and sometimes you hear one station, at other times the other, all mixed with a healthy dose of noise.

Therefore, in the U.S., the use of these frequency bands is tightly regulated by the Federal Communications Commission to ensure that radio stations, wireless carriers and other organizations are assigned “lanes,” or frequency spectra, to use in an orderly fashion.

Bouncing radio waves off the ground

Modern airplanes use altimeters, which calculate the time it takes for a signal to bounce back from the ground to determine a plane’s altitude. These altimeters are a vital part of automatic landing systems that are especially useful in cases where there is low visibility.

The radio altimeter in an aircraft tells the pilot how far off the ground the aircraft is. AP Photo/Rob Griffith[7]

So, if an altimeter interprets a signal from a wireless carrier as the rebounded signal from the ground, it may think that the ground is closer than it is and prematurely try to lower the landing gear and do the other maneuvers that are needed to land an aircraft. If interference with wireless carrier signals corrupts and garbles the altimeter’s radio signals, the altimeter may not recognize the rebounded signal and thus be unable to figure out how close to the ground the plane is.

[Understand new developments in science, health and technology, each week. Subscribe to The Conversation’s science newsletter[8].]

The portions of the radio frequency spectrum used by airplanes and cellphone carriers are different. The problem is that airplane altimeters use the 4.2 to 4.4 gigahertz range, while the recently sold – and previously unused – C-band spectrum for wireless carriers ranges from 3.7 to 3.98 gigahertz. It turns out the 0.22 gigahertz difference between the signals may not be quite enough to be absolutely sure that a cellphone carrier signal will not be mistaken for or corrupt an altimeter’s signal.

Full-speed 5G signals like those in services that wireless carriers are currently rolling out might interfere with aircraft altimeters. AP Photo/Alastair Grant[9]

Steering clear of trouble – for now

The telecommunication industry has argued that the gap of 0.22 gigahertz is enough and there will be no interference[10]. The airline industry has been more cautious[11]. Even if the risk is very small, I believe the consequences of a plane crash are enormous.

If the altimeters can register the stray signals as noise and filter them out, then they can function correctly. Upgrading aircraft altimeters is a costly proposition[12], however, and it’s not clear who would pay the cost.

The FAA has been testing altimeters and clearing ones that can be relied on[13] in the near future. AT&T and Verizon have agreed to not put up 5G transmitters and receivers near the 50 largest airports for six months while a solution is being worked out. This has averted a major crisis in the near term, but it isn’t a permanent solution.