GREENWICH, Conn., Aug. 18, 2022 /PRNewswire/ -- Following its successful US debut, THE DISRUPTORS – the first definitive, comprehensive documentary film on ADHD, one of the most commonly diagnosed, and widely misunderstood neurological conditions in the world today – is now available in Australia on Apple TV/iTunes, Google Play, and YouTube.

Over seven million US children, and over 23 million adults are diagnosed with ADHD. THE DISRUPTORS provides an inside look at five families currently living with this condition. The award-winning documentary film also hears from the nation's top experts on ADHD, and spotlights a small army of high-profile, game-changing personalities about their ADHD, as they testify to the challenges as well as the "super skills" they have leveraged to achieve great success.

Created and produced by Emmy-nominated producer, Nancy Armstrong, acclaimed producer Kristin Lazure, and award-winning director Stephanie Soechtig, in collaboration with Happy Warrior Media and Atlas Films, the film takes an immersive look inside our country's approach to ADHD, debunking the most harmful myths and reframing our perspective on this diagnosis. Viewers are intimately transported into the five families' households where they navigate the challenges -- and the surprising triumphs -- of living with ADHD.

SYNOPSIS: ADHD is one of the most commonly diagnosed-and widely misunderstood-neurological conditions in the world today, affecting nearly 10% of kids and a rising number of adults. But what if having an ADHD brain is actually an asset? A growing number of innovators, entrepreneurs, CEO's, Olympic athletes, and award-winning artists have recently disclosed that their ADHD, managed effectively, has played a vital role in their success.

After meeting  board-certified child and adult psychiatrist, and nationally recognized expert on ADHD,  Ned Hallowell, M.D., film producer Nancy Armstrong was inspired by his "strengths-based" approach to  ADHD and knew that the medium of film was the best way to finally upend the stigma associated with this diagnosis.

Nancy Armstrong is an Emmy-nominated producer and Executive Producer at Happy Warrior Media. Previously, she co-founded the award-winning women's leadership and media platform, MAKERS, which was named one of the 100 best websites for women by Forbes, and received the Women's Media Center Award for its ground-breaking contribution to women, history, and America. Nancy was inspired to create this film as a result of her family's experiences navigating life with ADHD.

"ADHD is simultaneously a major public health issue as well as one of the most powerful engines of creativity and innovation for the world. This film will liberate kids and families to know that they are not alone and that their child with ADHD has some challenges and some pretty impressive strengths. And if you're a kid with ADHD who has ever been told that you're never going to amount to anything, the role models in this film are the most powerful counter to that narrative. ADHD touches every classroom, every business, and every community in the world, and The Disruptors offers a blueprint to change ADHD from an issue to an opportunity - one kid at a time."-      Nancy Armstrong, Executive Producer/Producer

"These kids are seen as naughty or disruptive and in need of better parenting, but it's like asking someone with glasses to see without glasses.  Taking away this stigma that comes along with things that are neurological is a real sea change that needs to happen."-      Stephanie Soechtig, Director

Atlas Films is the production company behind the critically acclaimed films FED UP, The Devil We Know, Under the Gun, Knock Down the House, and more. 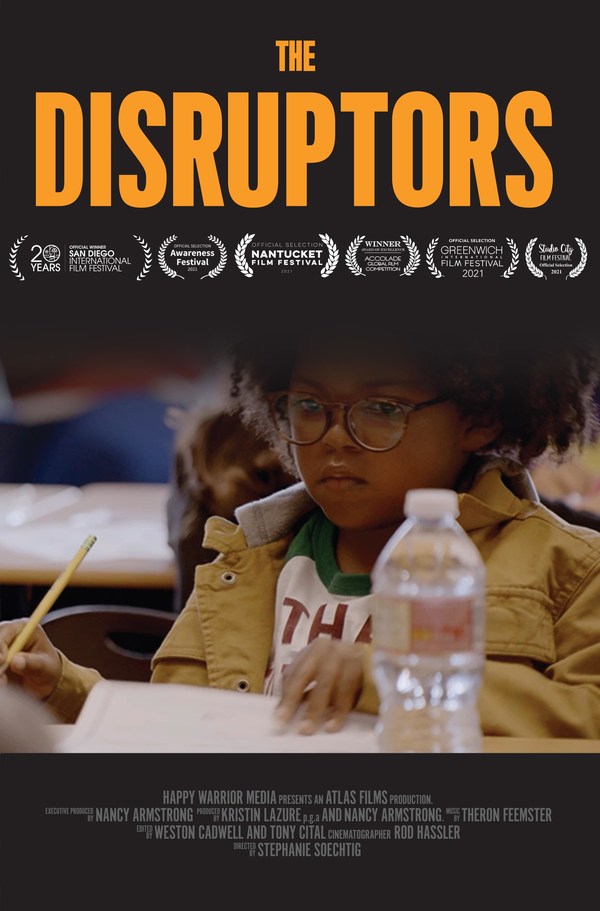