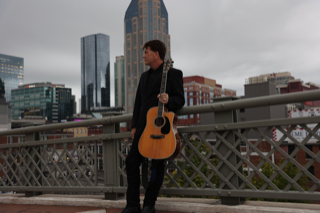 At a very young age I became intensely aware of music. I used to listen to songs with my great grandmother on her stand-up Victrola. While letting me sip coffee with milk and sugar from her saucer, she would play records from the 1920’s through the 1960’s. The songs I best remember were “Yes We Have No Bananas”, “How Much is That Doggie in the Window?”, “Come Back Nanny” and “Hello Dolly  I was very small then, but the songs and those times made me feel like I was 10 feet tall.

In 1970, I discovered the Beatles just after they had broken up.  One of my older siblings was playing one of their albums. I loved what I heard, and I became a fanatic, collecting all their record albums and memorabilia. I also compiled a book of magazine and newspaper clippings.  I spent a lot of time listening to everything on those albums from Meet the Beatles through Let It Be, and I remember praying at night that they would reunite.

At age seven, I wrote my first song called “My Dream Girl.”The only lyrics I remember are, “My dream girl is running from me; I can’t catch her, and she won’t catch me.”  I got my first guitar at 15 or 16. I took one lesson and began teaching myself chords. My fingering wasn’t always perfect, but I always got the chords right. Over time, my playing improved, and I really began to learn how to sing and play during summers at Watch Hill, Fire Island. I’d often be at the top of the dunes or in the residence, playing alone or for my friends.

I started to seriously write songs at 16 or 17, influenced by the 60’s and 70’s music I heard, which included The Eagles, Pink Floyd, Jackson Browne, James Taylor, Cat Stevens Steely Dan, Fleetwood Mac, and the Grateful Dead. The Grateful Dead were a major influence because they played songs from many different genres: folk, rock, rhythm and blues, country, and psychedelia. They also introduced me to Bob Dylan, as they played a lot of his covers. I went back and started to listen to music from my parents’ era - the old country stars, includingJohnny Cash, Willie Nelson, Patsy Cline, Dolly Parton, Motown, Frankie Valli, Nat King Cole, and tunes from the Great American Songbook. Essentially, I got involved in music by listening, writing, and playing. Music became the soundtrack to my life, because even when I hear certain songs now, they take me to the places I used to live and the people I was surrounded by.

For most of my life, my creative process has been a very intense experience.  I could only write when I was inspired.  Most of the time, I had no idea where my songs come from, because I felt like they were coming from a place inside me I didn’tunderstand and couldn’t describe.  When I write my best work, I feel like I’m a conduit, a pass through from another source. Sometimes, I feel uncomfortable, and angst ridden, because I know I need to release it fast, putting the lyrics on paper, and then connecting it to a melody before I lose the song. During these times, I try to give the moment immediate attention; I’ll leave a conversation, pull over the car, wake myself up, or pull away from whatever I’m doing and start writing. I often write lyrics and the music at the same time, but I’ve also written lyrics first or a melody first.

Thankfully, over the years, I’ve gotten better at purposefully writing songs on command without waiting for inspiration.  I’m starting to feel like I can write a song about anything at any time, and that’s a necessity if I want this to be a career. I want to write prolifically, and that’s what I’ve been doing lately. God gives us all special gifts, mine is the ability to pour out myself into the songs I write and sing.  The best songs often seem to write themselves. That’s exactly what happened with “I Called you Rose” “Hey Siri”, and a dozen or so others. The rest I’ve had to work at.

While most working musicians were sidelined from the road during the first stage of the pandemic, the lockdown gave me time to reflect on what I really wanted to do with my life. Several months after laying off the seven person staff at my law office, I told my wife I needed to get out of town for some fresh air and a new perspective. I discovered a passion for horses on a previous trip to Jackson Hole, Wyoming and fell into an exciting opportunity to go on an authentic cattle drive, punching 650cattle down Big Horn Mountain, Wyoming, along with a rancher and a few other riders. My passion for horses and the western life was a late in life discovery for me and I’ve become passionate about it..

Spending 12 hours a day in the saddle, I went through a few horses before connecting with my horse Reagan.  I purchasedhim from the rancher and had him shipped to Long Island, New York. I was a real cowboy for a week in the middle of nowherewhen I wrote “I Need a Horse”.  It came fast while riding and summed up everything I felt about my life at that moment. I wrote: “I’m a cowboy at heart, stuck in an office/punching a clock, wasting time on small talk/Love my God and I love my country/there’s something that’s missing in living my life/made my mistakes we all do of course/Lord all I ask is you’ll bring me a horse.”

That became one of the first songs I ever produced in a studio setting, with tracks done in California and vocals produced near where I live on Long Island. Greatly encouraged by the response I got from family and friends, I dusted off a bunch of songs I had written over the years but put on the back burner. With time on my hands, I also quickly wrote 15 new songs over the course of several months. These are the ones that will appear on my upcoming album Fly Away.

When I look at all the different things I’ve done in my life outside music - working in the State Department, teaching Chinese in Beijing and being a trade delegate to China, founding HALO Missions (Health and Learning for Orphans), being a volunteer firefighter, it’s clear that I love to reinvent myself.  When my life ends, I want to know I did it all, left it all on the table, lived a meaningful and happy life; that my live enhanced the world in as many ways possible.  Embarking on my musical journey has been a lifelong dream. I’m in the process of writing, playing singing, recording, and planning an upcoming tour.  I’m finally doing what I love to do. I’m living the life I always dreamed of.

I’m proud to say that expressing personal parts of my live led me to my breakthrough successes, with three releases dominating the Indie Charts. Though many people thought the traditional country flavored “I Called You Rose” – which reached #3 on the Euro Indie Chart and #8 on the World Indie chart – was a heartbreaking love song, it’s about quitting drinking. The follow-up “A Box for Jewels,” which hit the Top 20 on those charts, is a pop/folk tune about a special music box my grandmother gave me that plays “When Irish Eyes are Smiling” when you open it. She made me promise I would remember her when I opened the box. I think about her every day. “I’d Send you My Heart” is about communicating with my loved ones who have passed and sending them my love.

My two upcoming releases, produced by industry legend Stephen Wrench, continue this pattern of tapping into different styles and narrative inspirations. “Hey Siri” is my attempt at capturing the essence of our techno-crazy modern world, wistfully and humorously.  I address the addictions and frustrations with modern technology, lamenting the loss of simpler times before the cell phone/social media age. It has a lighthearted, playfully rolling, African styled groove. It’s my hope that people will connect with me when I sing in the chorus: “Siri’s unavailable//Alexa won’t stop talking/texts and emails coming, our children text for talking/I can’t remember my passwords days run like a river/my phone is like an organ. you’ll kill me if you take it away.”

The second lead single will be the upcoming album’s title track “Fly Away.” It’s a heartfelt ballad that all parents of a certain age can relate to, about all my mixed emotions I felt when my son headed off to college. When your child is born, everyone tells you that the years will fly by and before you know it, they’ll be on their own, but you think it’s just a cliché and don’t believe it. Until it really happens. The song touches on my feelings about him leaving the nest and my vow to always be there for him. It’salso about the journey of life, and as a metaphor, the title is also about finding a place for myself in the music industry. My success is contingent on me remaining authentic to myself as an artist.  I won’t change my music to fit the times, I want my music to change the way people think about the times and world we live in.