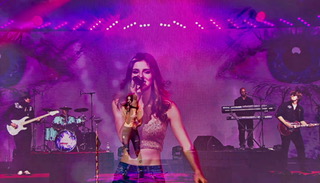 On Saturday, March 7th, the first throngs of bikers began rumbling their way toward Daytona Beach for another year of its infamous annual event – Bike Week. During the week, the endless growl of their engines seems to suffocate all other sounds out of the air in our little beach town (much to the dismay of some of the locals), but as a member of a working band, it’s always music to my ears. Bike Week is one of the best opportunities to expose new people from across the country (and sometimes across the pond) to our music by the thousands. With two back-to-back, prime-time shows booked at the premier venue on Main Street, Greye was especially excited for Bike Week this year, particularly as it happened to line up perfectly with the release of our latest single, “Lucky,” which is well on its way to its first million hits on YouTube!

Of course, we had all heard in the weeks leading up to Bike Week about the havoc that COVID-19 was wreaking on the rest of the world, but it was hard to grasp the magnitude of the situation while it was still so far away. However, it didn’t take very long to reach us. On the last Saturday of Bike Week, the city pulled all vendor permits for the event in an attempt to discourage large crowds. Just two short weeks after all the bikers had packed their bags and left for home, the Governor mandated all nonessential businesses to close their doors immediately and indefinitely, leaving us completely out of work with no end in sight (and as if the universe needed to squeeze in one last cosmic joke, the last live show we played was on Friday, the 13th of March – talk about a bad omen!).

As part of a band that eats, sleeps, and breathes practicing and performing live, it seems impossible to suddenly have so much time on our hands. While it’s definitely not under ideal circumstances, we’ve decided to treat this gift of time as a blessing in disguise and are using it to finish writing the rest of our upcoming sixth album. We’ve adopted a similar approach to the one we used a few years ago while writing our second record. During the early stages of the album’s development, I was traveling in Europe for a month, leaving the guys to their own devices back at home writing the music. Over a few weeks, they sent the raw instrumental versions of the songs to me, and I wrote most of the lyrics to them on the London underground, which I’m sure some of you may know is also called, ‘The Tube’ (we actually ended up naming that album ‘The Tube’ as a result!). While we’re definitely not 4,000 miles away from each other like we were all those years ago, I’ve always enjoyed that approach to the writing because unlike being in the room as they build things from the ground-up, it really streamlines my process and gives me time to sit with a more finished version of the song, and helps me imagine the finished product as a whole, not just in pieces.

With so many people’s jobs and lives upended by this virus, there’s no doubt that this is a very uncertain time to be alive, but I believe there is comfort to be found in the fact that we’re all going through whatever this is together. It’s such a blessing that this has happened in an age where we have things like YouTube and Facebook Live to stay connected and reach our audience even when we can’t be standing in front of them on stage. In the temporary absence of live gigs, tons of artists around the world are using these streaming platforms to host more stripped-back shows from their houses, and there’s definitely something very personal and uniquely human about these more intimate performances that we may not have had the opportunity to see otherwise. In the upcoming few weeks, Greye plans to host a few of our own live shows via YouTube and Facebook Live to reconnect with our fans and hopefully help them feel a little less alone during their self-isolation.

Sometimes I worry that as the years go by, live music may become obsolete. However, after only a few short weeks without concerts, it’s clear to me that that isn’t the case. The people singing on their balconies during quarantine in Italy, all the artists playing shows in their living rooms, and even the man playing his clarinet in the apartment across from me (I hear you, you are fantastic) are all proof that even through hard times, people still crave that escape that live music can bring them, and this time in our history may change the face of live music forever. I hope that when all of this is said and done, we can come away with a new appreciation and a reignited passion for live shows. For now, don’t let this lay you down and roll you over. Practice your instruments, write new songs, reach out and help someone less fortunate if you can, use your common sense, and just hold tight to each other (perhaps, metaphorically with the social distancing). Hope and fear cannot live together: choose hope, and we will all live to rock another day!