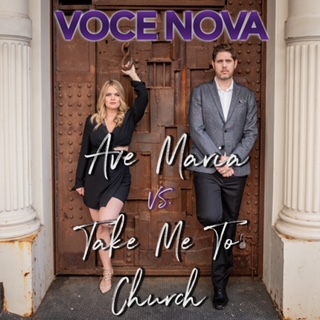 “Ave Maria vs. Take Me To Church”

In a perfect world, soprano Natalia Tsvi and tenor Gilad Paz – the unique classical crossover vocal duo collectively known as VOCE NOVA - would have taken the “America’s Got Talent” stage and performed their fascinating hybrid twist on Verdi’s “Libiamo” before all four judges and a live audience of 3000. But their audition date, March 14, 2020, was the day Hollywood began shutting down because of the pandemic, and Tsvi and Paz had to wait it out seven hours as the show’s production was scaled down around them. Brief but thrilling and magnetic, the duo gave it their all, shifting quickly from a traditional operatic duet into a high energy number complete with a Moroccan dance beat and a party atmosphere.

Testament to their unique stylistically eclectic approach as what they call a “gateway drug to classical music,” VOCE NOVA may not have won the hearts of the AGT judging panel, but it’s likely that had there been a full crowd behind them, they all would have been on their feet dancing, their hearts pounding and mouths agape at the duo’s infectious energy, risk-taking arrangements and overall sense of joyful fun.

Before they auditioned, Natalia and Gilad honed their act performing before diverse audiences everywhere they could, even holding court at open mics and karaoke clubs in the NYC area during the duo’s early stages. When they sang this same version of “Libiamo” at a dive bar in Brooklyn, the crowd – full of rappers and spoken word artists – lost their minds. As it turned out, the feedback was prophetic of what they would continue to hear after officially debuting VOCE NOVA in 2019. Folks who had never heard opera before were suddenly excited about it, surprised how much they loved it, in awe of the duo’s chemistry and stage presence. AsNatalia says, “They can’t always explain why, but their body just moves. They find themselves shaking their butts and clapping to opera!”

Since making their debut at a high profile fundraising event for a new artist group collective in NYC, VOCE NOVA has honed its craft, perfected its style and expanded its repertoire entertaining at boat shows, wedding expos, event planning conventions – and performances at weddings, including one high profile affair where they led an opera flash mob. Their reputation is earning them renown beyond New York, and they were recently contracted to do corporate events in the greater Washington, DC area.

VOCE NOVA brings their bold array of musical dynamics to their latest single, a dramatic and daring yet wildly irresistible mashup of Schubert’s timeless “Ave Maria” and Hozier’s 2013 hit debut single “Take Me To Church,” its title stylized (like many of their other recordings) “Ave Maria vs. Take Me To Church.” The track begins with Natalia in fine operatic form, singing Latin over a prominent church organ. Just when they’ve got us in Mass mode, Gilad in his pop voice sings “Amen” and dives into Hozier’s impactful, instantly recognizable hook. Then she returns with more “Ave Maria” over a rock guitar groove, leading to the song’s climactic segment where the two sing their individual songs at the same time creating a fascinating point/counterpoint. The piece closes with her singing a towering “Amen” and the two joining forces singing soaring high notes in harmony for the triumphant final chorus.

“At first it struck me as being a bit risky, because we were mixing the sacred with the profane and that could offend some people,” Gilad says. “Not every idea for a mashup strikes us as immediately opening itself to our brand of musical fusion, but this is one that made sense as soon as the words came out of Natalia’s mouth. Because we are veteran business people, we immediately honed in not only on the creative but commercial potential as well. It developed into a brilliant and intuitive mashup.”

“The proof was in the pudding, as they say, when we performed it recently at a non-profit in Soho for an audience that included several women from a gospel church,” says Natalia. “They freaked out about it, and we thought, ‘If the Christians love it, we’re good!’ Of course we know some may not take it as well or interpret it their own way, just as some traditional opera and classical folks won’talways like what we do. The way Gilad and I see it, we’re not hurting the quality of opera music, we’re bringing a fresh audience to it. VOCE NOVA, by its very definition as a fresh voice in crossover music, is all about breaking the rules and singing arrangements outside the box. This is 2022. It’s time transcend boundaries, create bridges and make this our own musical truth.”

Though VOCE NOVA creates its mashups with the energy of live performances in mind, the duo has recorded and released a batch of well-received singles over the past year, starting with straightforward duets of “O Holy Night” and “Time to Say Goodbye” and more recently including their most streamed song “I Will Always Love You vs. Come What May,” “Libiamo Remixed” and the supercool “Habanera vs. Smooth,” which blends the familiar piece from Carmen with the Santana Latin rock classic. All songs in the VOCE NOVA catalog are original arrangements created especially for the duo by top music producer Assaf Averbuch.

Natalia and Gilad met in February 2018 when both were invited to sing at a house concert on the Upper East Side showcasing opera hits. Getting together before the show to discuss repertoire, they quickly realized they had extremely similar life stories and paths in the music world. She was born in Belarus, was raised in Israel from the age of three and came to the U.S. to study opera after her mandatory Israeli Army service. Gilad was born to Israeli parents in the U.S., moved to Israel at age three, came back to the U.S. during his high school years and returned to Israel for five years, including service in the Israeli army. Gilad then returned to the States to study classical singing.

Both grew up singing in youth groups in Israel. She earned a Bachelor’s and Master’s in Music Performance and Voice and Music Education from Brooklyn College Conservatory and he earned a Bachelor’s of Music in Voice Performance from the Aaron Copland School of Music at Queens College. When they met, she had recently recorded a classical crossover album and he had created a classical crossover concert concept.

During that first concert, they performed together, they sang a traditional duet of “Libiamo,” never realizing that just a few years later, they would be using their twist on it for VOCE NOVA’s AGT audition piece. “We knew we were destined to work together,” Gilad says. “From the start, I felt that we both towed that line as classical singers who can also expertly perform other genres, which allows us to switch back and forth naturally. We knew we could create something special in the crossover realm. We started our repertoire going for a broad appeal, combining our voices on ‘Time to Say Goodbye,’ ‘Phantom of the Opera’ and ‘Hallelujah.’ Then one day, Natalia came up with the idea for a mashup of ‘Havana’ and ‘Besame Mucho,’ which was followed by my idea for combining ‘Nessun Dorma’ and ‘We are the Champions’. It was the first time we pursued this musical direction, and it evolved into our musical identity when we worked on the new repertoire that we added to our catalog in 2021.”

“Now,” the duo adds, “we will always be aiming to push boundaries with something that is different but that is truly who we are. One of our dreams is to do a VOCE NOVA performance with a full symphony orchestra. ‘Ave Maria vs Take Me To Church’ is a means towards that goal, a song that synthesizes the essence of what we do and the realization of what we first envisioned for ourselves back in 2018.”