Despite a constitutional right to a jury trial, more than 94% of criminal convictions[1] in the United States result from guilty pleas, not jury verdicts. Even innocent people, those who did not commit the crimes of which they are accused, can plead guilty – and they do.

Given the lack of reliable data[2], it is extremely difficult to estimate what proportion of pleas are from innocent defendants. However, many researchers believe the proportion is significant[3]. So far, the National Registry of Exonerations[4], a database that records all known exonerations of innocent defendants in the United States after 1989, has identified more than 580 cases in which innocent people chose to plead guilty.

Guilty pleas are a necessity because America simply lacks the attorneys, judges and courtrooms required[5] to try every criminal case. So prosecutors and defense attorneys attempt to negotiate charges and sentences acceptable to both sides – though prosecutors often have much more bargaining power than defense attorneys[6].

Even though prosecutors largely base their charging and bargaining decisions on the assessed strength of available evidence, such assessments are not perfect[7]. While guilty people are more receptive to plea offers, innocent defendants are not immune to the potentially coercive factors that make pleading guilty attractive[8] such as pretrial detention and differences in duration of sentences.

Prosecutors often offer plea deals with dramatically lower sentences than those likely to be imposed if a jury finds the defendant guilty. In some cases, defendants who opted for a trial instead of pleading guilty have received tenfold sentence increases from the original plea offer[9], or even life sentences[10], upon conviction.

This possibility can make a plea offer very attractive, and even create what some have called a “trial penalty[11]” for defendants who refuse to plead guilty.

Even innocent defendants may feel it would be too risky to go to trial[12]. Studies have confirmed that the larger the sentence gap between the plea offer[13] and the likely trial sentence, the higher the likelihood for defendants – both guilty and innocent – to plead guilty.

When defendants are held in jail before trial, they may be more likely to accept a plea deal as well – even if they are innocent. The promise of immediate release, usually through probation or a sentence for time already served behind bars, has been found to increase both true and false guilty plea rates[14].

With tools like these, the justice system was already skilled at encouraging defendants to plead guilty – even if they were innocent. Then, the coronavirus hit. 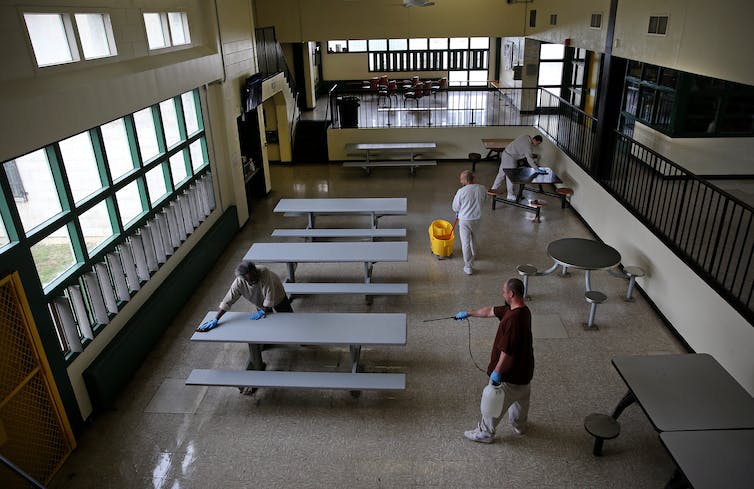 Inmates at a Massachusetts jail clean a common room to prevent the spread of the coronavirus. David L. Ryan/The Boston Globe via Getty Images[15]

Pleading during a pandemic

And then courts closed or limited their operations[17], seeking to follow workplace safety rules and social distancing guidelines. Many courts stopped hosting jury trials for months.

These facts further increased the risks of going to trial: Defendants had to wait longer for their day in court, and each day they spent in jail increased their risk of being exposed to the coronavirus. The research on pleas has clearly indicated that when the cost of going to trial increases[18], guilty pleas increase too.

Sure enough, a survey of 93 defense attorneys found that plea bargaining practices have indeed changed during the pandemic[19]. More than 60% of the lawyers surveyed said they thought prosecutors were offering more lenient deals than they would have before the pandemic. At the same time, more than 30% of the attorneys had a client who claimed innocence, but nevertheless accepted a plea offer because of concerns related to COVID-19.

To examine whether COVID-19 exacerbated the innocence problem in guilty pleas among a larger sample of potential defendants, we used a computerized simulation platform of legal procedures[20] funded by the National Science Foundation and developed at the University of Massachusetts Lowell. More than 700 U.S. adults agreed to participate in our study, and we randomly assigned them to be either innocent or guilty of stealing a pair of sunglasses. In the simulation, all participants were detained before trial, then offered a plea deal to be immediately released.

Among both guilty and innocent conditions, we further randomly informed half of the participants about the complications related to COVID-19 – that the jail was currently having an outbreak of coronavirus and court dates had been pushed back because of the pandemic.

As the pandemic wanes, courts and the legal system as a whole are resuming more normal operations. But the fundamental problems with the plea process – excessive trial penalties and pretrial detention – will remain.