On Mother’s Day, it is important and poignant to recall the hard life of Mary Ball Washington, who struggled – mostly alone – to raise our Founding Father. Historians have left us with inaccurate and mostly unpleasant accounts of her long and laborious years.

After George Washington’s death, historians canonized him and his mother, too.

But unlike George’s enduring sainthood, praise for Mary was short-lived. In the late 19th century, George’s biographers began interpreting the few shreds of evidence about Mary — almost all of it from George - to mean that she was overprotective, possessive and greedy.

By the 1950s she had become, in the word of a Pulitzer Prize-winning biographer[1], a termagant, an ill-tempered shrew. The author, James Flexner, created a portrait of Mary as a woman insatiably hungry for money that she didn’t need, and intent on keeping George by her side. Other nasty myths still circulate alongside these: that she was illiterate, pipe-smoking, uncouth and slovenly.

These poisonous portraits bear little resemblance to the industrious, worried, frugal, devoted and self-reliant woman who emerges from my research as a professor of history and women’s studies. I recently wrote a book about Mary Washington[2]. In my research, I found that Mary’s challenging life was very different from the myths that grew up around her. 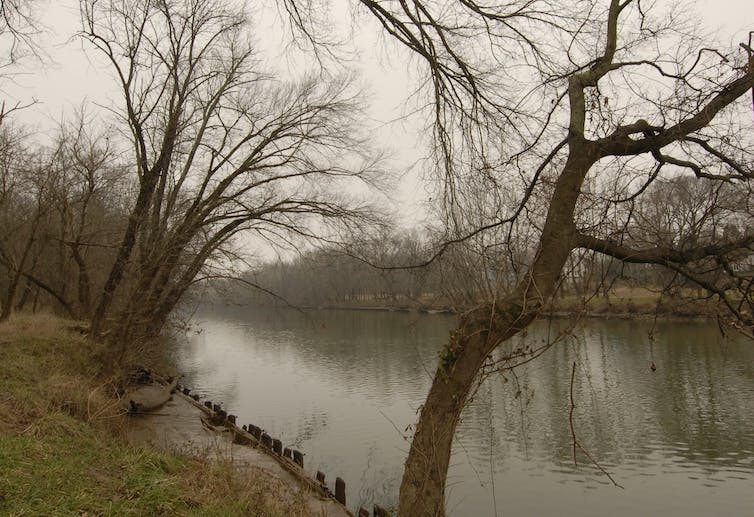 A view of the Rappahannock River as Mary Washington would have seen it from her front windows. Enrico Ferorelli, CC BY-SA[3]

Daughter of a servant, mother of a hero

Mary was born in either 1708 or 1709; there are no records. Her father was an elderly, slave-owning planter and her mother was probably an indentured servant. By 12, she had lost her father, stepfather, mother and half-brother to death in the disease-ridden Chesapeake region[4].

From these terrible losses Mary acquired two parcels of land, a good horse and saddle, and three enslaved boys. She stayed in what had been her mother’s house, living with her older half-sister. There the shocked girl worked diligently to help manage the household and make herself indispensable.

She also grew into her role of slave-owner, and learned to extort work out of people who were enslaved. She began assuming the habits of Anglican piety in this mournful time, trying to subdue her feelings and resign herself to God’s mysterious will.

When she was about 22, she married Augustine Washington, a wealthy widower with two sons in Great Britain and a daughter in Virginia. Mary traded her duties on a small farm and the companionship of her affectionate half-sister for more expansive tasks as the mistress of a large plantation and marital obligations to an acquisitive, restless planter.

The couple had five surviving children: George, born in 1732; Elizabeth, Samuel, John Augustine, and Charles. The growing family and many of their enslaved people moved three times, eventually settling across the Rappahannock River[5] from the growing town of Fredericksburg.

Augustine died suddenly in 1743 when he was about 49 years old. George, the eldest, was 11, and the youngest was 4. Augustine left his best properties to his eldest sons by his first marriage, Lawrence and Augustine. Mary was allowed to stay in the Fredericksburg house but was to turn it over to George when he came of age at 21.

She received the same number of enslaved people she had brought to the marriage. If she wanted more, they were to come from those allotted to her other children - setting their desires at odds with hers. If she remarried, the executors could demand security to be sure her children would receive their full inheritances at 21. Failing that she would lose custody of them[6]. She remained a widow all her years.

Single motherhood in the 1700s

With her income and resources seriously diminished because of the dispersal of Augustine’s properties, Mary set about making sure that her daughter and four sons had such education and polish as she could provide. Elizabeth learned the arts of serving tea, managing a household and decorative handwork.

Mary kept the young men in proper clothes and wigs. These could be expensive, costing as much as 3 pounds. That could have been about US$2,400 in today’s dollars, assuming the American pound was valued the same as the British pound at the time. The wigs had to be de-liced by enslaved people who would otherwise be doing field work.

Mary dissuaded George from going into the British Navy at 14 but failed to convince him not to join General Edward Braddock’s disastrous [7] 1755 campaign. She nursed George back to health after the illness he suffered succeeding this battle and several other serious sicknesses, including smallpox.

She tried to imbue in her children her extensive practical and religious wisdom. She had some success, especially with George and Elizabeth, but none of her children became frugal. Despite the family’s straitened circumstances, Mary saw all of her offspring marry up. George married Martha Dandridge Custis, the richest woman in Virginia.

In the years before the Revolution, Mary, like almost all small farmers at the time, was poorer than ever and sometimes asked her extremely wealthy eldest son for small amounts of money. As he slid deeply into debt himself from his extravagances and expanding ambitions, he begrudged her the insignificant bits of cash she needed and insisted she could not be in want — a claim he repeated throughout her life.

George wrote in 1782[8], having not seen or been in touch with his mother for seven years, “confident I am that she has not a child that would not divide the last sixpence to relieve her from real [emphasis in the original] distress. This she has been repeatedly assured of by me…in fact she has ample income of her own.”

Mary lived through the long years of the revolution alone. In her last years, she struggled like all small farmers against debt and bad harvests. She, too, suffered from high taxes, severe shortages of corn and salt and the threat of smallpox. Her overseer, exploiting the vulnerability of an elderly woman, cheated Mary throughout the war. 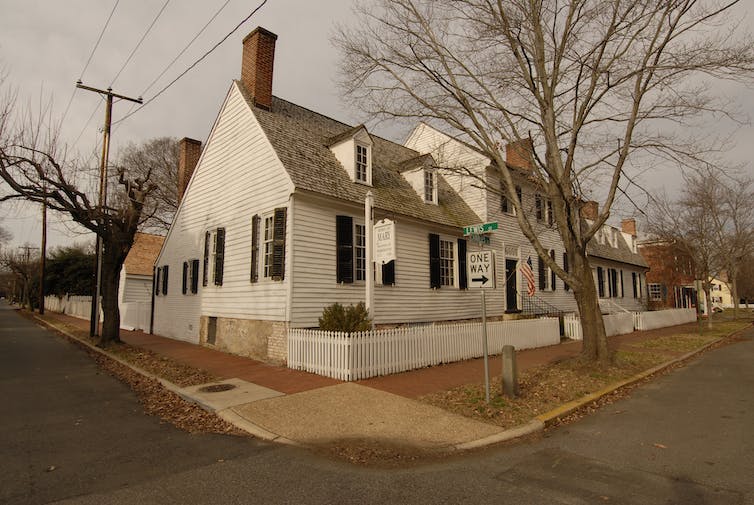 George Washington bought his mother her final house in Fredericksburg when he took over the Ferry Farm. Enrico Ferorelli, CC BY-SA[9]

Mary lived to see the revolution won and her son elected the nation’s first president. As George said, praising her in Fredericksburg[10] at the end of the revolution, she led him to manhood in the absence of a father[11]. Always sparing in her praise of worldly achievements, she gave him the compliment he probably most valued: that he had always been a good son. She died of breast cancer in August 1789 months after George became the nations’ first president.

Mother and son shared many traits

After some years of reflected hagiography, Mary‘s reputation began a precipitous decline in the late 19th century. Ideas about biography and psychology began changing. Nurture began competing with an earlier idea of people being born with an essential character that needed to unfold. Mothers, who in the antebellum period were described as self-sacrificing vessels of virtue holding the new nation together, began to be held responsible for facilitating – or not - their sons’ ambitions.

Male writers then saw evidence of Mary’s love for George – such as keeping him out of the British Navy – as possessiveness and interference with his glorious military destiny. They saw her requests for money as her irrational greediness, not his stinginess[13].

Male historians, even now, have never doubted that his exasperation with his mother was justified, nor have they tried to find out more about her circumstances. Instead, they agree that he desperately needed to free himself from her efforts to limit him before he could father our nation.

But mother and son were much alike in physical strength, in superb horsemanship, in irascibility, in penny-pinching, in the capacity for extraordinary persistence and in their strenuous, lifelong efforts to maintain a measure of equilibrium. I believe that without Mary’s brave, enduring and self-denying mothering, we would not have had the brave, enduring and self-denying man who led both the revolution and the optimistic experiment in governing that resulted.