For most people, getting to the stars is nothing more than a dream. But on May 5, 2021, the 60th anniversary of the first suborbital flight, that dream became a little bit more achievable.

The space company Blue Origin announced that it would start selling tickets for suborbital flights to the edge of space[1]. The first flight is scheduled for July 20, and Jeff Bezos’ company is auctioning off one single ticket to the highest bidder[2].

But whoever places the winning bid won’t be the first tourist in space.

On April 28, 2001, Dennis Tito, a wealthy businessman, paid US$20 million for a seat on a Russian Soyuz[3] spacecraft to be the first tourist to visit the International Space Station. Only seven civilians have followed suit[4] in the 20 years since, but that number is poised to double in the next 12 months alone.

NASA has long been hesitant to play host to space tourists[5], so Russia – looking for sources of money post-Cold War in the 1990s and 2000s – has been the only option available to those looking for this kind of extreme adventure. However, it seems the rise of private space companies is going to make it easier for regular people to experience space.

From my perspective as a space policy analyst[6], recent announcements from companies like Blue Origin and SpaceX are the opening of an era in which more people can experience space. Hoping to build a future for humanity in space, these companies are seeking to use space tourism as a way to demonstrate both the safety and reliability of space travel to the general public. 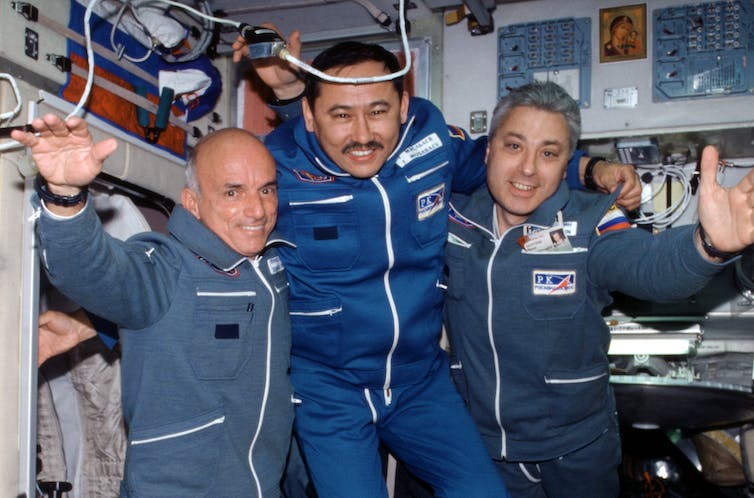 Dennis Tito, on the left beside two Russian astronauts, was the first private citizen to ever go to space – and he spent more than a week on the International Space Station. NASA/WikimediaCommons[7]

The development of space tourism

Flights to space like Dennis Tito’s are expensive for a reason. A rocket must burn a lot of costly fuel to travel high and fast enough to enter Earth’s orbit.

Another cheaper possibility is a suborbital launch, with the rocket going high enough to reach the edge of space and coming right back down. This is the kind of flight that Blue Origin is now offering. While passengers on a suborbital trip experience weightlessness and incredible views, these launches are more accessible.

The difficulty and expense of either option has meant that, traditionally, only nation-states have been able to explore space. This began to change in the 1990s as a series of entrepreneurs entered the space arena. Three companies led by billionaire CEOs have emerged as the major players: Blue Origin, SpaceX and Virgin Galactic. Though none have taken paying, private customers to space, all anticipate doing so in the very near future.

British billionaire Richard Branson has built his brand on not just business but also his love of adventure. In pursuing space tourism, Branson has brought both of those to bear. He established Virgin Galactic[8] after buying SpaceShipOne[9] – a company that won the Ansari X-Prize[10] by building the first reusable spaceship. Since then, Virgin Galactic has sought to design, build and fly a larger SpaceShipTwo[11] that can carry up to six passengers in a suborbital flight.

The VSS Unity spacecraft is one of the ships that Virgin Galactic plans to use for space tours. AP Photo/Matt Hartman[12]

The going has been harder than anticipated. While Branson predicted opening the business[13] to tourists in 2009, Virgin Galactic has encountered some significant hurdles – including the death of a pilot in a crash in 2014[14]. After the crash, engineers found significant problems with the design of the vehicle, which required modifications.

Elon Musk and Jeff Bezos, respective leaders of SpaceX and Blue Origin, began their own ventures in the early 2000s.

Musk, fearing that a catastrophe[15] of some sort could leave Earth uninhabitable, was frustrated at the lack of progress in making humanity a multiplanetary species. He founded SpaceX in 2002 with the goal of first developing reusable launch technology to decrease the cost of getting to space. Since then, SpaceX has found success with its Falcon 9[16] rocket and Dragon spacecraft[17]. SpaceX’s ultimate goal is human settlement of Mars; sending paying customers to space is an intermediate step. Musk says he hopes to show that space travel can be done easily and that tourism might provide a revenue stream to support development of the larger, Mars-focused Starship system.

Bezos, inspired by the vision of physicist Gerard O’Neill[18], wants to expand humanity and industry not to Mars but to space itself. Blue Origin[19], established in 2004, has proceeded slowly and quietly in also developing reusable rockets. Its New Shepard[20] rocket, first successfully flown in 2015, will be the spaceship taking tourists on suborbital trips to the edge of space this July[21]. For Bezos, these launches represent[22] an effort at making space travel routine, reliable and accessible as a first step to enabling further space exploration. 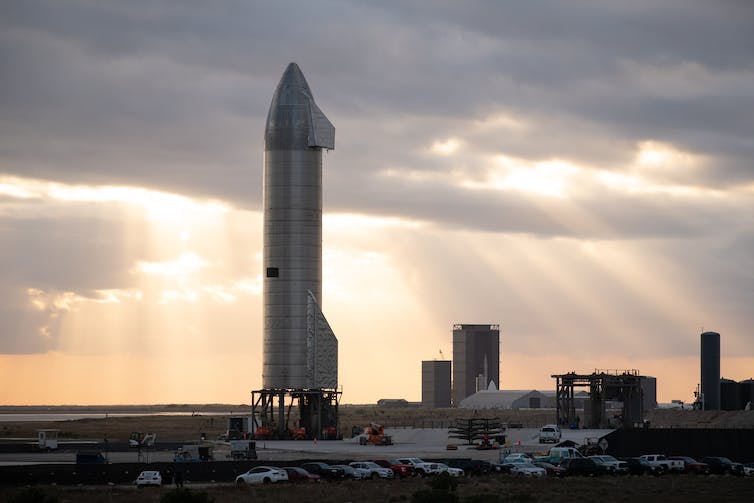 SpaceX has already started selling tickets to the public and has future plans to use its Starship rocket, a prototype of which is seen here, to send people to Mars. Jared Krahn/WikimediaCommons, CC BY-SA[23][24]

Outlook for the future

Blue Origin is not the only company offering passengers the opportunity to go into space and orbit the Earth.

SpaceX currently has two tourist launches planned. The first is scheduled for as early as September 2021[25], funded by billionaire businessman Jared Isaacman. The other trip, planned for 2022, is being organized by Axiom Space[26]. These trips will be costly[27] for wannabe space travelers, at $55 million for the flight and a stay on the International Space Station. The high cost has led some to warn that space tourism[28] – and private access to space more broadly – might reinforce inequality between rich and poor. 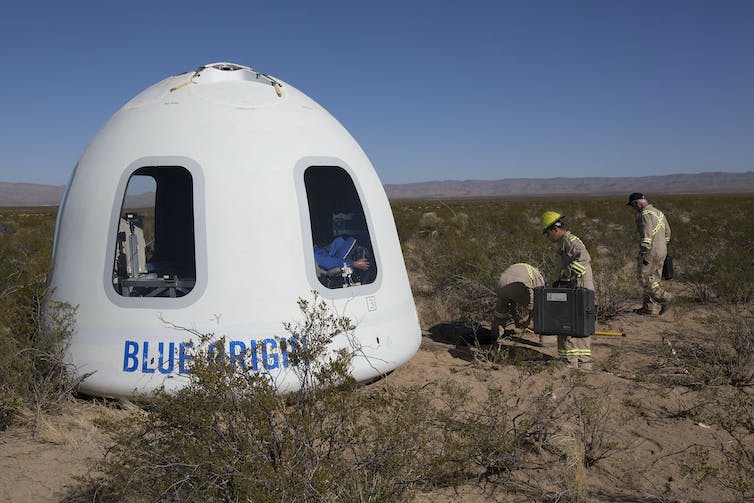 The first tourist to fly on a privately owned spaceship will ride in Blue Origin’s New Shepard Crew Capsule, seen here after a test flight in Texas. NASA Flight Opportunities/WikimediaCommons[29]

While Blue Origin is already accepting bids for a seat on the first launch, it has not yet announced the cost of a ticket for future trips. Passengers will also need to meet several physical qualifications, including weighing 110 to 223 pounds (50 to 101 kg) and measuring between 5 feet and 6 feet, 4 inches (1.5 to 1.9 meters) in height. Virgin Galactic, which continues to test SpaceShipTwo, has no specific timetable, but its tickets are expected to be priced from $200,000 to $250,000[30].

Though these prices are high, it is worth considering that Dennis Tito’s $20 million ticket in 2001 could potentially pay for 100 flights on Blue Origin soon. The experience of viewing the Earth from space, though, may prove to be priceless for a whole new generation of space explorers.

This is an updated version of an article originally published[31] on April 28, 2021. It has been updated to include the announcement by Blue Origin.