From Charlottesville[1] to the Capitol[2], medieval imagery has been repeatedly on show at far-right rallies and riots in recent years.

Displays of Crusader shields[3] and tattoos derived from Norse and Celtic symbols[4] are of little surprise to medieval historians like me[5] who have long documented the appropriation of the Middle Ages[6] by today’s far right.

But amid all the expected Viking imagery and nods to the Crusaders has been another dormant “medievalism” that has yet to be fully acknowledged in reporting on both the far right and conspiracy theorist movements: the Byzantine Empire[7].

Byzantium – or more properly, the medieval Roman Empire – controlled much of the Mediterranean at the height of its territorial rule in the mid-sixth century. Centered in modern-day Istanbul from A.D. 330 to 1453, its capital of Constantinople was a thriving intellectual, political and military power. One of its crowning achievements, the church of Hagia Sophia[8], is a testament to the empire’s architectural and artistic prowess. 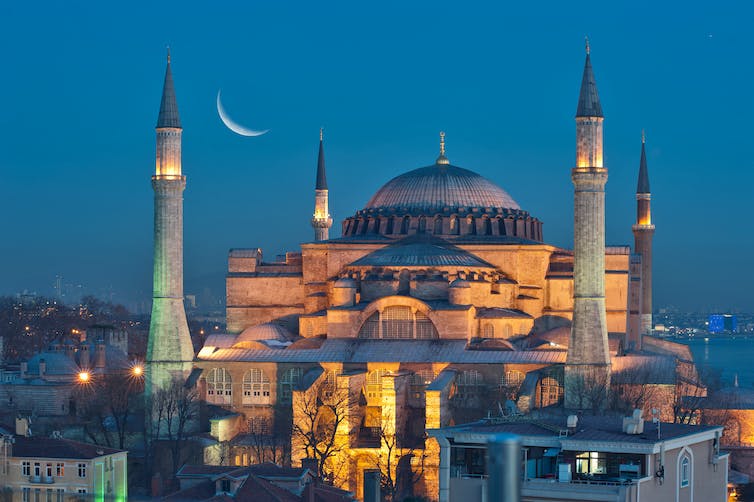 The Hagia Sofia stands as a testament to Byzantium’s achievements. Salvator Barki/Getty Images[9]

But in the Western world, the Byzantine Empire has been largely overlooked and forgotten[10]. High school students in the United States are likely to know little about the empire. And nowadays, the word “byzantine” has simply come to mean complicated, secret and bureaucratic[11]. This lowering of its status isn’t entirely a new process. As far back as 1776, English historian Edward Gibbon was disparagingly referring[12] to the empire’s inhabitants as “the servile and effeminate Greeks of Byzantium.”

Despite this modern disdain for Byzantium in the West, it has recently served as an inspiration to various factions of the far right.

Described by Kessler[15] as “a premier organization for pro-white advocacy in the 21st century,” The New Byzantium is based on the white supremacist leader’s misrepresentation of history.

His premise is that when Rome fell, the Byzantine Empire went on to preserve a white-European civilization. This isn’t true. In reality the empire was made up of diverse peoples who walked the streets of its capital, coming from as far away as Nubia, Ethiopia, Syria and North Africa. Contemporaneous sources noted – at times with disdain – the racial and ethnic diversity[16] of both Constantinople and the empire’s emperors.

But Kessler’s “New Byzantium” is intended to preserve white dominance[17] after what he calls “the inevitable collapse of the American Empire.” The organization has been operating under the radar since 2017 with little online footprint.

Kessler isn’t alone in appropriating the empire. Through my research, I have monitored references of Byzantium in online forums. Mentions of Byzantium are scattered across message boards frequented by both white supremacists and QAnon enthusiasts – who spout conspiracy theories about a deep-state cabal of Satan-worshipping, blood-drinking pedophiles running the world.

Across 8kun and other online platforms I have reviewed, the Byzantine Empire is discussed as either continuing the legacy of Rome after it was, in their understanding, “destroyed by the Jews” or being the only true empire, with Rome being merely a historical myth created to degrade Byzantium’s power and importance.

This latter story emerges in a QAnon thread on “Baking” – that is, the connecting and weaving together of drops (messages) by the enigmatic Q. One post states: “It all makes sense when you learn that the books of the bible are plagiarized copies of the chronology of Byzantium, and so is the mythical Roman Empire, that never existed in Italy but was in fact centered in Constantinople.”

Other QAnon commentators across message boards and Twitter speak of the “exiled throne of Byzantium,” noting, “the Empire never went away, it just went occult.” They exclaim “Long live Byzantium” and call for a “return to Byzantium” to save people from the satanists.

In some renditions, Byzantium is, by way of some hazy illuminati[18] connections, the origins of the “deep state” – the myth of an underground cabal of elites who run the world in secret. It has persisted in secrecy since Constantinople’s fall, either trading in eunuchs on the clandestine market or preserving whiteness and Christianity, depending on the thread’s negative or positive outlook on the empire.

For many on the far right, talk of Byzantium is cloaked in Islamophobia – both online and in tragic real-life events.

A white supremacist who killed more than 50 worshippers at mosques in Christchurch, New Zealand[19], in 2019 railed against the Turks and the conquest of Constantinople in a 74-page manifesto[20].

“We are coming for Constantinople, and we will destroy every mosque and minaret in the city. The Hagia Sophia will be free of minarets and Constantinople will be rightfully Christian owned once more,” the shooter wrote. Throughout QAnon message boards, the reconquest of Hagia Sophia[21] is emblematic of the destruction of Islam and the restoration of a mythic white Byzantium. One post stated: “When we free Constantinople and the Hagia Sophia, maybe we can talk.”

This “reconquest” of Constantinople had even been tied in some online posts to the presidency of Donald Trump, with images circulated online seemingly prophesying that it would happen under his tenure. In one image, Trump is seen congratulating Russian President Vladimir Putin “on the retaking of Constantinople” and shaking hands in front of what is presumably meant to be the Hagia Sophia, though is actually the Sultan Ahmed Mosque, also known as the Blue Mosque.

Putin himself is not averse to drawing on the symbolism of Byzantium[22]. The Russian state has long tried to position itself[23] as the rightful successor[24] to the Byzantine Empire, with Moscow as the “Third Rome.” This forms part of a religious and political doctrine[25] tied to Russian territorial expansion that can be traced back as far as the late 15th century[26].

The far-right appropriation of Byzantium in the U.S. appears to be influenced by this Russian interpretation. Indeed, Russian proponents of the “Third Rome” doctrine have been cited as influences by prominent figures on the American right[27].

No matter the provenance of the recent interest in Byzantium from America’s white supremacists and conspiracy theorists, one thing is clear: It is based on a very warped idea of the Byzantine Empire that has emerged out of the empire’s fraught place in our histories, caught between ancient and medieval, spirituality and bureaucracy.

[Over 100,000 readers rely on The Conversation’s newsletter to understand the world. Sign up today[28].]