As the U.S. Senate proceeds with its business, split 50-50 between Republicans on one side and Democrats and independents on the other, lawmakers and the public at large are concerned about the future of the filibuster[1].

Under the rules of the U.S. Senate, if just one lawmaker doesn’t want a bill to progress, they can attempt to delay its passage indefinitely[2] by giving a principled speech[3], or even just reading “Green Eggs and Ham[4],” as Ted Cruz did in 2013. A supermajority of three-fifths of the senators, or 60 of the 100, is required to stop the filibuster – or signal that one would not succeed – and proceed to a vote.

As a result of the current Senate split, the majority party – the 48 Democrats and two independents who generally caucus with them, plus Vice President Kamala Harris[5] – cannot unilaterally decide to block filibusters and end debate on a bill. This effectively prevents most bills from ever being voted on without a sizable number of Republicans also agreeing to end debate.

Many critics have called for the filibuster’s elimination[6]. Its continued use was briefly in question during negotiations[7] between the parties over how to run an evenly split Senate. But the filibuster has survived[8], and it will likely continue to be a major obstacle[9] to passing legislation.

As a comparative politics scholar[10], I have come to the conclusion that because many democratic constitutions already include so many other checks and balances, giving the minority party[11] veto power over widely supported legislation is unnecessary[12], which is why most U.S. states[13] and most democratic countries[14] do not allow their legislators to filibuster. 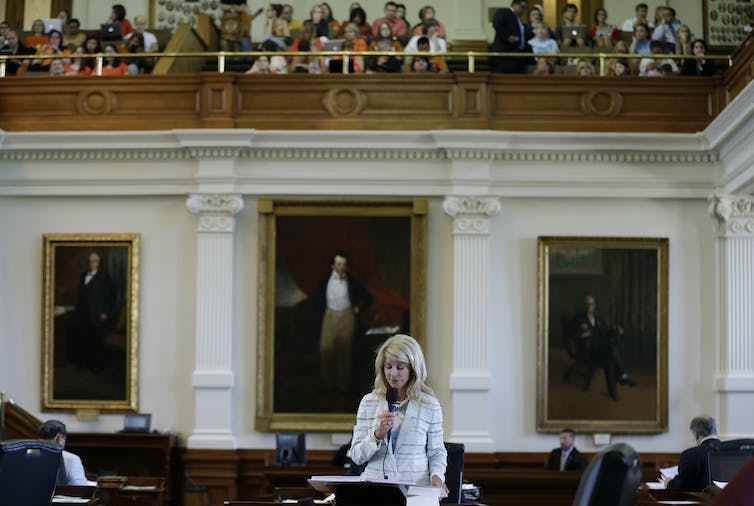 In June 2013, Texas State Sen. Wendy Davis filibustered an anti-abortion bill. While a version of the bill was eventually enacted, in 2016, the U.S. Supreme Court struck down the abortion restrictions as unconstitutional. AP Photo/Eric Gay[15]

Plenty of checks and balances

According to Senate Minority Leader Mitch McConnell, the filibuster ensures “that slim majorities can’t ram through half-baked ideas[16].” But even without the filibuster, it’s actually quite hard to pass legislation in the U.S., thanks to the Constitution’s robust separation of powers[17].

Bills need to pass both chambers of Congress with majority support, which can be a huge hurdle[18]. Founder James Madison[19] argued that having two chambers was beneficial, as it prevents the passage of “improper acts of legislation[20].” Not every government has two legislative chambers, however. There is only one chamber in Nebraska’s legislature[21] – just like the national legislatures of Denmark[22], Finland[23], Iceland[24], Luxembourg[25], New Zealand[26] and Norway[27].

Even if the bill has the support of the majority in both the Senate and the House, it still faces a potential presidential veto, which can be overridden[28] only by a two-thirds supermajority in both congressional chambers. Yet, at the state level, many legislatures can override vetoes by their governor[29] with a simple majority, which is the same threshold needed to override presidential vetoes in Estonia[30], France[31] and Italy[32]. Other democracies, such as Austria[33] and Germany[34], don’t even have a presidential veto.

If a bill somehow gets passed by Congress and is signed by the president, the Supreme Court can still declare it unconstitutional and strike the law off the books. Not all democracies give their highest court this power: The Constitution of the Netherlands[35], for instance, explicitly prohibits this. In Switzerland[36], the highest court can strike down laws passed by the cantons, which are similar to U.S. states, but cannot overturn federal legislation. 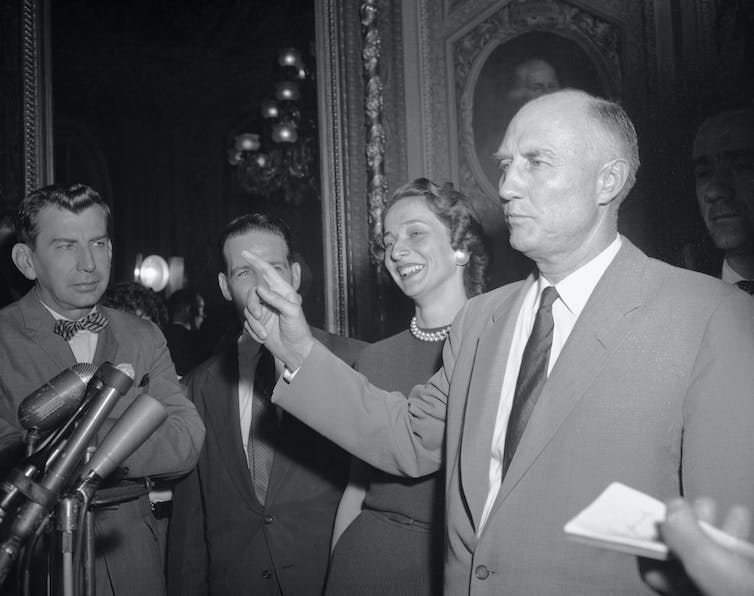 In August 1957, Sen. Strom Thurmond, then a South Carolina Democrat, attempted to prevent the passage of the Civil Rights Act by filibustering for a record 24 hours and 18 minutes. Bettman via Getty Images[37]

The creation and weakening of the filibuster

McConnell argues that the filibuster plays a crucial role in our constitutional order[38]. Yet, it’s important to point out that the founders did not include the filibuster in the U.S. Constitution[39], and the filibuster became part of the Senate’s rules only by mistake[40] when then-Vice President[41] Aaron Burr[42] recommended that the Senate clean up its rulebook by removing redundant language.

One of the rules[43] that was axed in 1806 at Burr’s behest[44] empowered a simple majority to cut off debate. Eventually, this mistake was realized and exploited when the Senate endured its first filibuster in 1837[45].

Since that time, there have been many efforts to restrict the use of the filibuster. A frustrated Woodrow Wilson – the only U.S. president to have earned a Ph.D. in political science – once noted that the “Senate of the United States is the only legislative body in the world which cannot act when its majority is ready for action[46].” In 1917[47], he successfully curbed the use of the filibuster by pressuring the Senate to adopt a rule that allowed for a two-thirds supermajority to end debate.

In 1974[48], the Senate further limited the use of the filibuster by agreeing that when using a process called “reconciliation[49]” to pass a budget-related bill, debate in the Senate is limited to 20 hours[50]. Effectively this means that reconciliation bills cannot be filibustered, as debate cannot continue in perpetuity.

After the maximum allotted time for debate has elapsed, reconciliation bills require only the approval of a simple majority[51]. This process was used in 2017 to pass Donald Trump’s tax cuts[52] with only 51 votes[53]. This same process is being used[54] to try and pass President Joe Biden’s coronavirus relief package.

In 1975, senators reduced the two-thirds supermajority[55] required to end debate to the present three-fifths[56], thereby creating the current 60-vote threshold.

In 2013, the filibuster was again weakened when Democrats, then in the majority, eliminated its use on all presidential nominees except those to the Supreme Court[57], in response to the repeated Republican obstruction[58] of Barack Obama’s nominees.

In 2017, Republicans, having retaken the Senate, went one step farther by eliminating the use of the filibuster on Supreme Court nominees[59]. All three of Trump’s nominees to the nation’s highest court – Neil Gorsuch[60], Brett Kavanaugh[61] and Amy Coney Barrett[62] – were confirmed with fewer than 60 votes. 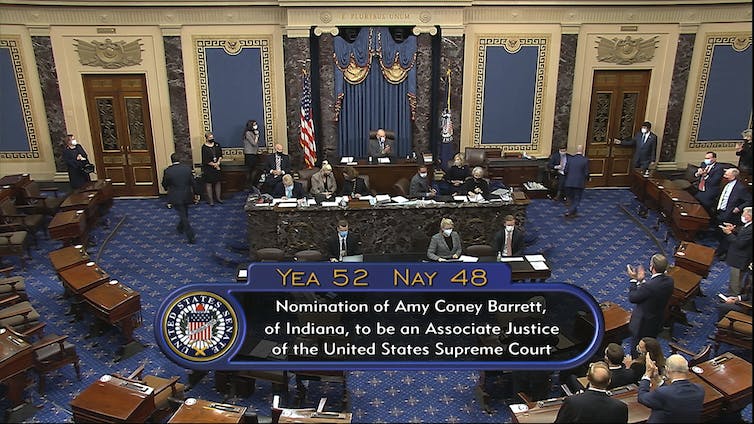 After senators changed the rules in 2017 to prevent the filibustering of Supreme Court nominations, three justices, including Amy Coney Barrett in 2020, were confirmed to the court with fewer than 60 votes. Senate Television via AP[63]

The obstruction of progress

In recent years, the filibuster has not hurt Republicans as much as Democrats because the GOP has focused on cutting taxes[64] and confirming judges[65], both of which can now bypass the filibuster thanks to Senate rule modifications.

Democrats, on the other hand, are going to have a hard time making major health care changes[66] or enacting immigration reform[67], as both would be vulnerable to a Republican filibuster[68].

[Deep knowledge, daily. Sign up for The Conversation’s newsletter[69].]

The U.S. system has been designed with more checks and balances than many other successful democracies. Eliminating the filibuster[70] would bring the federal government in line with the majority of U.S. states and democratic countries around the world[71].