“Do not forget your masks, your identification, a pen and that you are BLACK!!![1]”

“This Sunday my vote will be Black.” 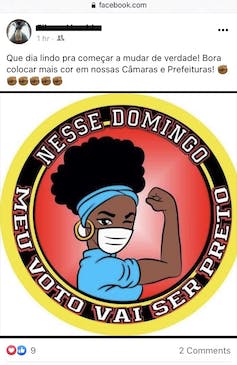 People of African descent make up 56% of Brazil’s population and just 17.8% of its Congress[2]. But Black political participation is surging in Brazil, especially in local government.

Black women still hit a hard glass ceiling when aiming for higher office, though. Just 13 of the 513 representatives in the lower house of Brazil’s Congress are Afro-Brazilian women[5], and the 81-member Senate has only one Black woman, Eliziane Gama[6]. The first Black woman to have served as governor in Brazil, Benedita da Silva, this year lost her race to be mayor of Rio de Janeiro[7].

But winning isn’t necessarily the only reason Afro-Brazilian women hit the campaign trail.

Black women’s political participation has soared in Brazil[8] since the 2018 assassination of Marielle Franco[9] in Rio de Janeiro. Franco was a Black lesbian city councilwoman who advocated for the city’s poor Black slum communities, in what Brazilian media dubbed the “the Marielle Effect[10].”

“Marielle’s murder could have had a chilling effect upon Black candidates, [but] it instead inspired a wave of Black candidacies,” writes the Afro-Brazilian scholar Dalila Negreiros in the leftist publication NACLA Report on the Americas[11].

Even before Franco’s killing, there were many Black women politicians – and my research shows how they opened[12] the door for groundbreaking candidacies like Franco’s. Trailblazers include Benedita da Silva as well as Janete Pietá[13], who represented São Paulo in Congress from 2007 to 2015. 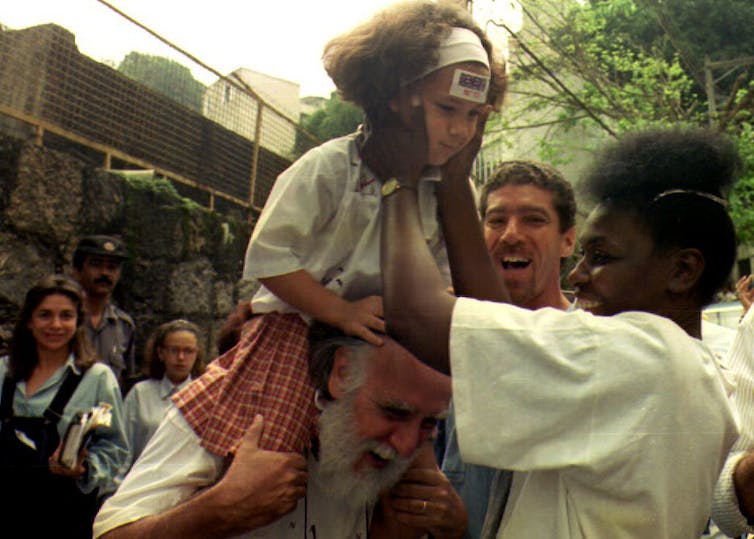 Benedita da Silva of the Workers Party on the campaign trail in Rio in 1992. Avanir Niko/AFP via Getty Images[14]

I interviewed Pietá and many other Black female politicians in Brazil between 2004 and 2007. This was during Brazil’s economic boom under the leftist president Inacio Lula da Silva[15]. Most of the women whose campaigns I studied were from Lula’s Workers Party, but one, Eronildes Carvalho, was a right-leaning evangelical.

I found that the women often used race and gender in their campaigns to mobilize voters, especially in predominantly Black cities.

When running for Congress, Pietá told me she wore bright colors and did her hair in interesting styles, with short braids in the front, like bangs, and longer braids in the back, to show pride in her African ancestry – “even though it looks like a joke” to some.

“A large part of the Brazilian population…have origins of African-descent. Nevertheless, some of them are not conscious of this,” Pietá told me.

Olivia Santana also put her race and gender up front when running for city council in the northeastern city of Salvador in 2004. She proudly announced herself as the “Negona da cidade[16],” the big Black woman of the city.

“It was a slogan that was more about the history of elections, of Black participation in elections,” Santana told me in 2006. “My campaign made the Black racial question visible.”

While city council members may see their race and gender as an asset, I found Afro-Brazilians running for federal office did not believe racial appeals would be helpful[17]. 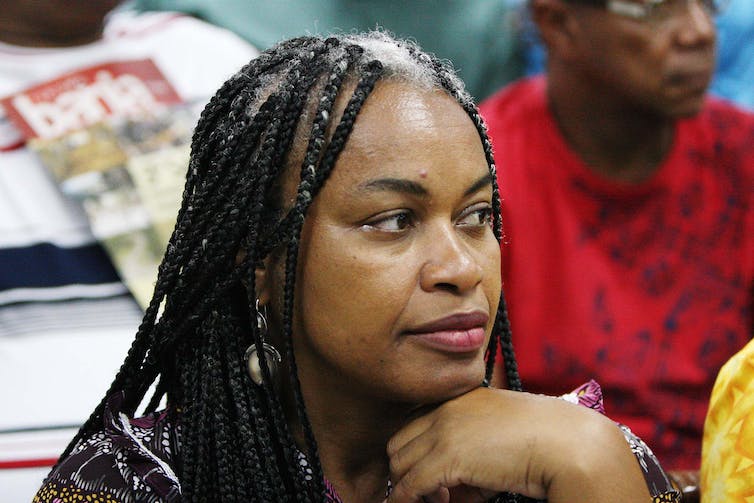 More than a campaign

I could not find polling on national perceptions of Black women to verify whether the candidates’ perceptions were backed up by data. But Brazil’s relationship with race is fraught – and that fact is well documented.

Though long mythologized as a mixed-race “racial democracy,” the reality in Brazil is more black and white.

As in the United States, Black people in Brazil have generally worse health, employment and economic outcomes than white people. They are 40% more likely to die of COVID-19 than whites[20] and despite some affirmative action policies[21] face higher unemployment. Black men are killed daily by the military police who patrol the streets of many poor – and heavily Black – neighborhoods in Brazil[22].

[Deep knowledge, daily. Sign up for The Conversation’s newsletter[23].]

Inequality continues even for Afro-Brazilians who climb the social ladder. White college graduates earn 45% more than their Afro-Brazilian peers[24].

When a Black man, João Freitas, was beaten and killed by two white security guards at a supermarket in Porto Alegre on Nov. 19, 2020, President Jair Bolsonaro’s dismissive comment was “everyone has the same color[25].”

“In Brazil, racism doesn’t exist[26],” was the vice president’s response. 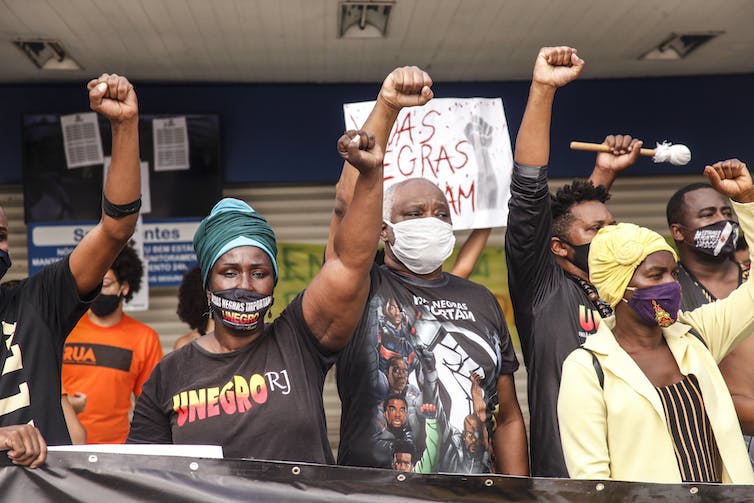 Protesters outside a Carrefour supermarket in the city of Niteroi on Nov. 22, 2020, after a Black man was killed by Carrefour security guards. Luis Alvarenga/Getty Images[27]

As politicians and activists, Afro-Brazilian women have made racism a campaign issue. They discuss why budget cuts to the public health system would disproportionately hurt Black Brazilians[28] and promote paid family leave, educating Afro-Brazilian citizens of how racism, sexism and classism – alone and in combination – affect their lives.

That’s why running for office is more than a political campaign for Afro-Brazilian women, my research finds. As they drive around blaring messages from cars, hold town halls and run social media ads, they raise the racial consciousness of their constituents and expand their party’s political agenda.

This year, 16 years after I first followed her campaign, Olivia Santana again asked voters to entrust their vote to Black women. On Facebook and Twitter, she posted catchy political jingles[29] with lyrics like, “Preta prefeita, respeita a preta” – “The Black woman mayor, respect the Black woman” – done in a musical style popular in Brazil’s heavily Black northeast. In that campaign video, young Afro-Brazilians wearing face masks dance alongside Santana, who is also masked.

“It is not only the people of the United States that can elect a woman like Kamala Harris,” she tweeted on Nov. 13, 2020. “We also can make a difference for this city.”

Progress is slow. But win or lose, Black Brazilian women are opening doors for the future.