One common claim by President Donald Trump’s reelection campaign has been that his administration beat IS, or what’s formally known as the Islamic State terrorist group.

It came up most recently in the vice presidential debate, when Mike Pence boasted, “We destroyed the ISIS caliphate[1]. … You know when President Trump came into office, ISIS had captured an area of the Middle East the size of Pennsylvania. President Trump unleashed the American military, and our armed forces destroyed the ISIS caliphate and took down their leader al-Baghdadi without one American casualty.”

Similar victory claims have been made by Trump himself dating back to October 2017[2] and include him saying “We’ve done more against ISIS in nine months than the previous administration has done during its whole administration – by far, by far.” Other statements in March 2018[3] and February 2019[4] include Trump’s boast “on terrorism, in Iraq and Syria, we’ve taken back almost 100%, in a very short period of time, of the land that they took. And it all took place since our election.”

I am a scholar[5] who tracks the Islamic State group[6] and its affiliates[7]. I pay careful attention to where the group is active and holds territory as part of a University of Massachusetts-Dartmouth project I lead called MappingISIS.com[8].

Data I have collected – including from official reports issued by the State Department, the Global Anti-ISIS Coalition[9], the Pentagon, IHS Conflict Monitor, a think tank that provides data on wars, and other think tanks – show that the president’s claims are false: The Trump administration mostly finished the job, but the Obama administration launched the successful campaign against the Islamic State, and did roughly half the work the president is trying to claim credit for.

Using these sources, I have created a map that for the first time delineates territory liberated from the Islamic State under Obama and under Trump. The map makes clear that the Obama administration liberated approximately 50% of ISIS territory before handing the successful war effort off to Trump. 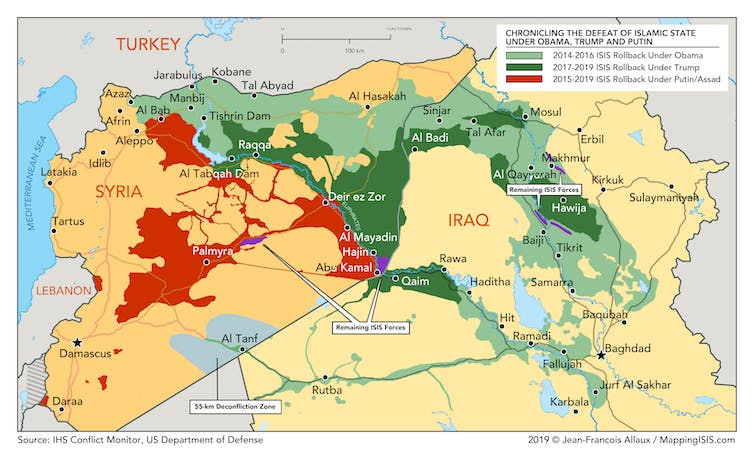 In 2014, the Obama administration launched a military campaign called Operation Inherent Resolve[12] to use U.S. and allied troops[13] and provide aid to other groups[14] to fight the Islamic State group.

Military, government and outside analysts agree that the campaign was successful on all fronts before Trump took office in January 2017. For instance, the U.S. envoy to the international anti-ISIS coalition testified in June 2016 – seven months before Trump became president – that the Islamic State “has lost 47% of its territory in Iraq, and 20% in Syria[15].”

The 72-nation coalition stated “by November 2016 Islamic State had lost 62%[16] of its mid-2014 ‘peak’ territory in Iraq, and 30% in Syria.” And the British think tank IHS Markit reported that by the final months of Obama’s presidency, Islamic State territory in Iraq had shrunk from 40% of the country[17] to just 10%. 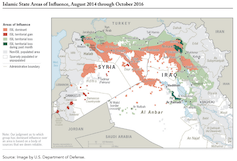 A Pentagon map of progress against the Islamic State by October 2016 shows the group had already lost the territory marked in green. U.S. Department of Defense via U.S. Institute of Peace[18] 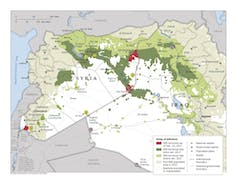 Pentagon and State Department maps further demonstrate that in the two and half years the war was fought under Obama, the Islamic State lost its only international border (with Turkey) and vast swaths of territory. They clearly show that approximately half of the Islamic State’s territory had been liberated by the time Obama left office[20].

For Iraq specifically, I have used Pentagon and State Department reports to create a map showing how much of the country the coalition liberated from the Islamic State under the Obama administration, including half of Mosul, the largest city that had been under the group’s control. 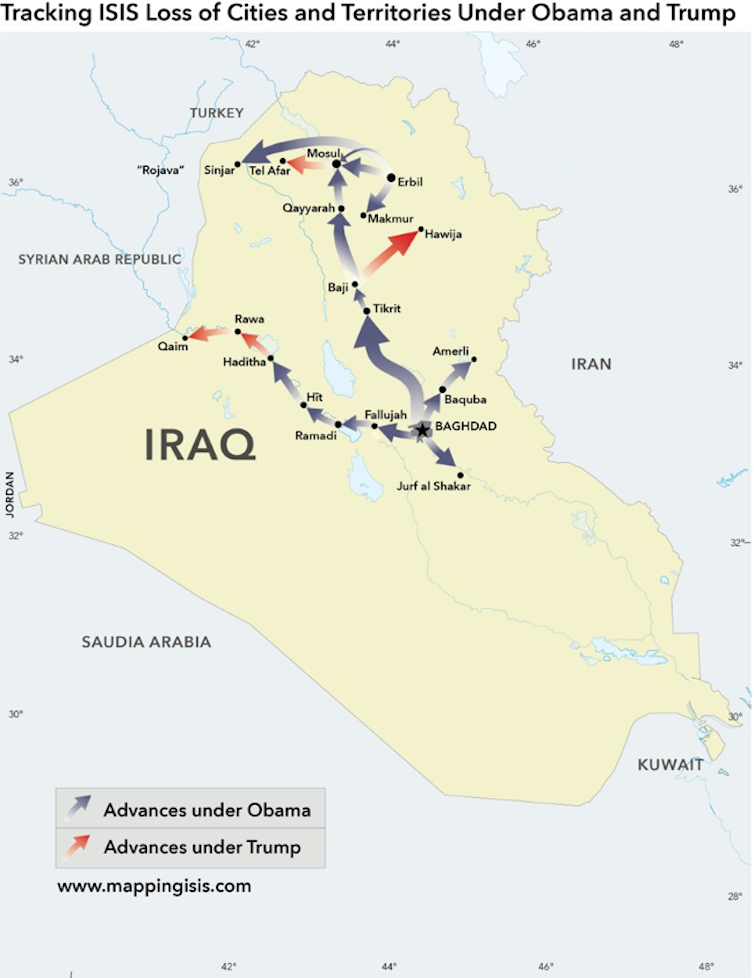 Under the Obama administration, the Islamic State was driven out of most of Iraq. Brian Glynn Williams/MappingISIS.com, CC BY-ND[21]

The Islamic State group also lost large numbers of fighters under Obama. In December 2016, a month before Obama’s term ended, CNN reported that the Pentagon said it had killed 50,000 militants[22] in airstrikes since 2014, leaving no more than 15,000 Islamic State fighters to defend their collapsing state. Just weeks after Obama left the White House, Gen. Raymond Thomas, head of U.S. Special Operations Command, told a symposium in Maryland, “We have killed over 60,000[23] [ISIS members].”

[Deep knowledge, daily. Sign up for The Conversation’s newsletter[24].]

In addition to losing territory and fighters under Obama, the Islamic State lost most of its oil-producing capacity[25] in 2015, as a result of a massive bombing campaign known as Tidal Wave II, which drastically limited the group’s ability to fund its operations.

Under Obama, the Islamic State also lost its backup headquarters city, the Libyan town of Sirte[26].

Trump’s claims of conquering “almost 100% [of the Islamic State] … since our election[27]” are false. Objective history records that Obama launched and oversaw much of the victorious war that the current president claims for himself.