With the U.S.-China trade war intensifying[1], there is a lot of talk about whether tariffs save American jobs – as President Donald Trump claims[2] – or destroy them[3].

On May 14, for example, Trump said his tariffs helped save[4] the U.S. steel industry. Whether or not that’s true, many economists and industry organizations argue trade protectionism is actually hurting workers in a range of other areas, such as the solar power sector[5], civil aircraft[6] and auto manufacturing[7].

So is the trade war making Americans better off or worse? Political economists like me[8] have been exploring this question since Trump’s trade war began about a year ago. The answer makes a big difference to the economic welfare of American workers. And, with the 2020 elections soon approaching, it may help determine whether Trump is able to remain in the Oval Office. 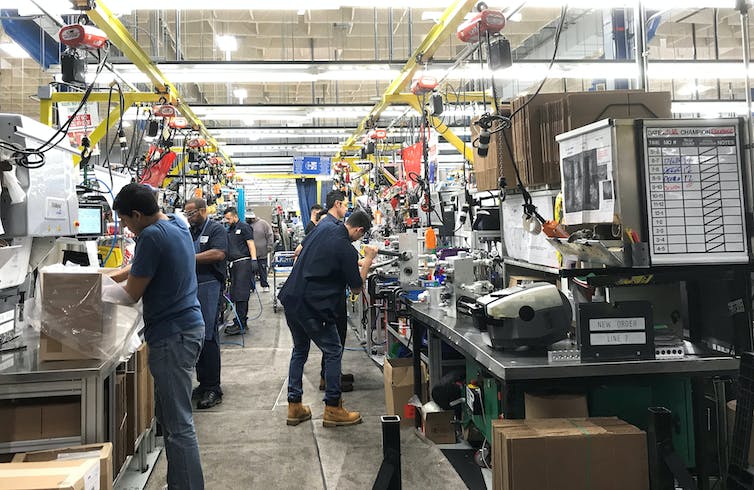 Some parts of the manufacturing industry have experienced jobs growth during the trade war. Reuters/Ann Saphir[9]

At first glance, the jobs data does look good for Trump’s argument.

The good news for Trump doesn’t stop there. Some of the biggest gainers over the last year are industries like fabricated metals, machinery and electronic instruments, all of which saw gains of 15,000 to almost 30,000 jobs over the past year. All those industries enjoy at least some protection from Trump’s tariffs.

Those numbers seem to support Trump’s rhetoric that tariffs are providing a vital shot in the arm of America’s ailing manufacturing sector. And they may even show why the U.S. economy continues to hum despite economist fears[15] that a trade war would hurt growth[16]. 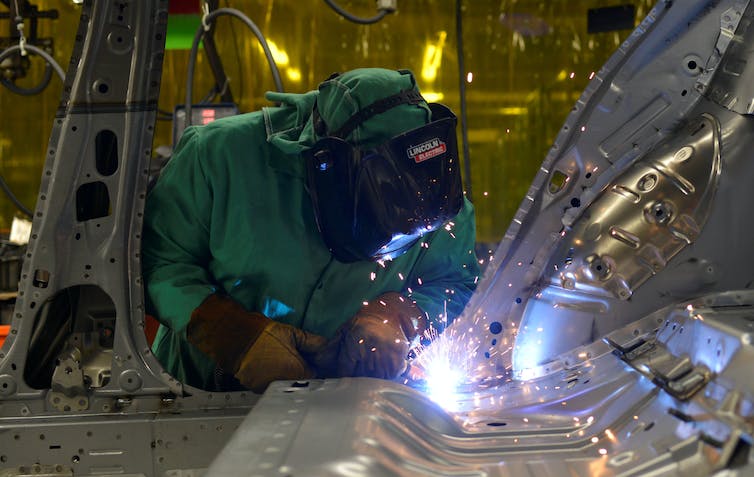 The auto industry is among those that have been hurt by tariffs on steel imports. Reuters/William DeShazer[17]

Unfortunately, not all industries are enjoying the same success.

Of the 20 major manufacturing categories in the latest Bureau of Labor Statistics data[18], only six have grown faster during the trade war – which arguably began with the threat of widespread tariff increases in April of 2018 – than in previous years. The rest, which include chemicals, paper and textiles, either didn’t enjoy a boost or lost ground during the period.

And here is one lesson from the trade war. If Trump and his supporters want to claim that tariffs helped accelerate job creation in machinery and metals, then it follows that his policies should share some of the blame for the less encouraging performance of other sectors hurt by retaliation from other countries[19].

After Trump extended steel tariffs to the European Union, the EU hit America’s textiles industry. Canada[20] targeted some paper products in retaliation for tariffs on steel and softwood lumber[21]. And China, Trump’s primary antagonist, hit chemicals[22] along with a large swath of other industries – with further retaliation[23] on the way. 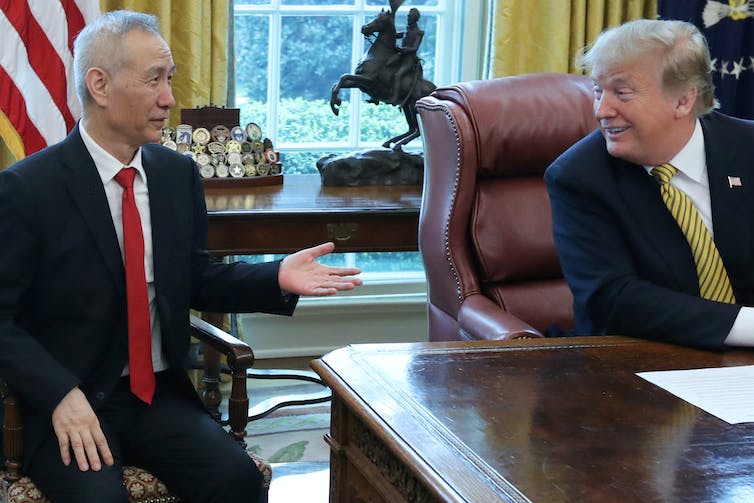 But this is only one part of the equation for how tariffs are affecting working Americans and their quality of life. What about wages, which account for 70%[25] of an employee’s average compensation?

There’s less good news for Trump in this data.

The annual growth in seasonally adjusted hourly pay during the trade war averages out to around 3.2%[26] across all private sector U.S. employees.

There are two important things to say about that 3.2%. First, it falls short of pre-Great Recession levels, when wage growth was typically a full point higher[27]. Second, wage growth in manufacturing – the sector Trump has lavished the most attention on – actually lags behind[28] the national average at just 2.3%.

Those wage numbers are good reason to hold our applause for Trump’s tariffs. Protected industries are adding jobs, but wages aren’t living up to expectations.

The competing job numbers explain why the debate over Trump’s tariffs are full of confusing anecdotes – and why most anyone can find “good news” to support their favorite argument.

Americans have heard United Steel Workers thank Trump[29] for helping bring over 1,000 jobs[30] back to Birmingham, Alabama. They’ve also heard General Motors announce that it lost US$1 billion[31] in 2018, partly because tariffs contributed to rising production costs, and that as many as 14,000 jobs are being cut[32].

A fuller picture of how well workers are doing requires looking beyond the jobs numbers at how much money they’re actually taking home – and how it’s affecting their living standards.

And none of this says anything about another crucial part of the equation: consumer prices. If the latest data from Goldman Sachs is on the money, things are about to get a whole lot worse for working-class Americans as the price tags attached to products affected by the trade war begin to rocket upward[33].

This is hardly good news for the average household.