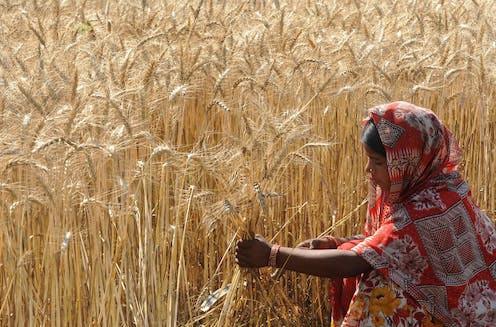 Sitting in a semi-circle in the yard outside of a village school in Nepal, a group of farmers share their concerns about the future. They discuss how the rain is unreliable – droughts and floods are both becoming more common. The heat is overwhelming before the rains come.

In April, May and June, extreme heat makes it harder to work, crops wilt and sometimes die, and livestock get sick.

All of the young farmers in this schoolyard are women, most in red saris. The few men present are elderly. Young men don’t live here anymore. As the crops fail more often, the men take contracts for migrant work, handing over papers and passports to recruiters who organize travel to nearby cities or faraway countries.

As climate change, and particularly heat waves, worsen [1]for South Asia’s farmers, women are increasingly left to try to make crops grow in the oppressive heat.

We are sociologists[2] who study[3] how climate change influences health and well-being, with a particular focus on women and children, including communities like this one in South Asia. We are also interested in how interventions by governments and aid groups can alleviate these negative impacts.

According to the Indian Meteorological Department, 2021 was the fifth-warmest year in India since 1901, and it capped the hottest 10-year span on record in the country[4]. In 2022, the region has seen record-breaking and unrelenting heat[5] from March through June, with temperatures reaching 47 degrees Celsius (116 F) in India and 51 C (124 F) in Pakistan.

An intense heat wave in April 2022 sent temperatures 8 to 15 degrees F (4.5 to 8.5 degrees C) above normal across India on the heels of the country’s hottest March in more than 120 years of record keeping. The maps show temperatures on April 27; 45 C is about 113 F. Joshua Stevens/NASA Earth Observatory[6]

Researchers predict that even under an optimistic scenario in which the world takes bold enough steps to keep global warming to 1.5 C (2.7 F) compared with preindustrial times, South Asia will experience more frequent bouts of deadly heat[7]. Some areas in the region have already experienced temperatures outside of the range for human productivity and into dangerous territory for human survival.

These thresholds occur at wet-bulb temperatures[8] of around 32 C (89.6 F) and 35 C (95 F), respectively, and can be lower[9]. Wet-bulb temperatures take into account both the air temperature and relative humidity. Hot and humid conditions lead to a greater risk of heat stress[10], as humans are less able to cool their bodies through sweating.

Some of the hardest-hit areas have been agricultural regions[12] such as the Indian states of Punjab, Uttar Pradesh and Madhya Pradesh. There, crop losses affect household food supplies as well as income. The crop damage is especially troubling as these are wheat-producing regions that are seeing yields drop by 50% at the same time that the conflict in Ukraine raises concerns over wheat shortages for 2022[13]. India banned wheat exports[14] in May 2022 in an effort to control domestic prices.

All these trends are particularly concerning from a gender perspective[15], as our research in India, Nepal and Bangladesh shows.

As heat rises, women are more likely to work in agriculture. We find that this is particularly true for women with little education, and previous research[16] suggests impoverished women are most likely to take agricultural work, because of a lack of other opportunities. While men can migrate for work, norms about women’s responsibilities to stay at home and care for children and the elderly leave them with few other opportunities to make a living.

Because of rural people’s dependence on agricultural work and the outdoor exposed nature of that work, women face exceptional health risks because of heat exposure[17]. Yet compared with urban areas, rural areas tend to have less access to air conditioning[18], health resources[19] and other tools[20] that could combat heat dangers.

Harvesting jute, as these women were doing in Bangladesh in August 2021, and other crops often means being in direct sunshine all day long. Maruf Rahman / Eyepix Group/Future Publishing via Getty Images[21]

Farmers also face more stress than other workers when their income is threatened by heat, because agricultural success is intrinsically linked with climate. Agricultural failures are associated with farmer suicide[22], post-traumatic stress and other mental health concerns[23].

In situations where farmers are providing food for their own families, agricultural failures also mean decreased food security. Women-headed farming households have been found to be particularly vulnerable to food insecurity[24], as they have more limited access to land, education, financial resources, weather information and modern agricultural technologies than farms headed by men. Thus, climate change in rural areas is becoming an increasingly gendered problem.

Heat certainly remains a concern for urban dwellers[25]. Yet urban economies are more diverse and less climate dependent, and urban areas are better equipped with resources to combat heat risks[26]. Public health officials worry[27] that those in rural areas lack knowledge about heat risks and what they need to do to prevent heat-related illness.

Governments and aid organizations can help those groups in a variety of ways, from mitigating heat’s effects on humans and agricultural production to providing new economic opportunities[29] for rural women. Nongovernmental organizations are already working to spread simple solutions that can help rural farmers stay cooler, like covering roofs with solar-reflective paint[30] to keep homes from heating up.

Scientists in India have also developed a heat-resistant wheat variety[31]. Elsewhere, scientists are working on “climate-proofing” other crops[32] and looking to traditional practices that enhance agriculture’s resilience[33] to climate change, such as growing a more diverse mix of crops and using farm byproducts like manure as fertilizer.

A scientist in China inspects rice bred to withstand the impacts of global warming. Luis Liwanag/AFP via Getty Images[34]

Additional efforts include crop insurance to help support farmers when heat does decrease yields. Crop insurance has low adoption rates among the poor[35] in low- and middle-income countries. Small-scale farmers may not qualify for insurance because of their farm’s small size or because their crops are grown primarily to feed their family. Some strategies that have been used to increase its use include expanding insurance beyond cash crops[36] to include crops families eat and lowering thresholds for coverage[37]. Insurers must also be willing to recognize women as farmers. Many female farmers have struggled to receive agricultural assistance because of gender bias[38].

More broadly, efforts to slow climate change on a global scale are what is most needed to help South Asia’s female farmers. As the world is increasingly likely to surpass a 1.5-degree Celsius warming scenario in the near future[39], it becomes critical to reduce global greenhouse gas emissions to avoid the most harmful heat scenarios[40].