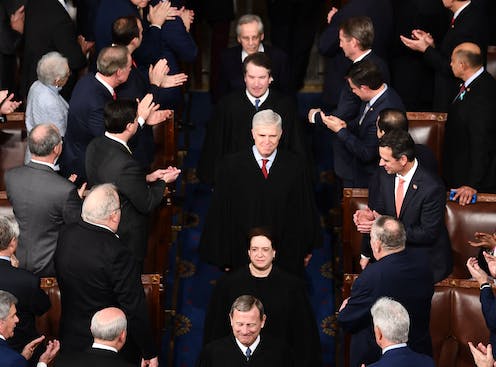 The U.S. Supreme Court struck down[1] a New York law on June 23, 2022 that had imposed strict limits on carrying a handgun in public. It was a much anticipated decision, as the court continues to issue opinions ahead of[2] wrapping its term in the next week or two[3].

But people were being kept waiting about when exactly the court’s ruling on Dobbs v. Jackson Women’s Health Organization, which could overturn Roe v. Wade, will be issued.

The court announces what days it will release rulings and is only scheduled to announce more on June 24. No one outside the court knows which major rulings will be published when – or if the court could decide to release more opinions into early July.

There’s a reason the court remains so secretive and why its abortion ruling appears likely to be one of the last before the court lets out for the summer. We asked constitutional scholar and Supreme Court expert Stefanie Lindquist[4] to explain what’s behind the court keeping a tight lid on its work.

Does research back up this idea that the court saves the most high-profile rulings for last?

There has been very careful research[6] done by very distinguished scholars and judges who tested the proposition that the court’s most important decisions are handed down late in the term. They measured importance based upon the extent to which the New York Times covered that case. And their research confirmed that it is absolutely true that the most highly important decisions the court renders – ones that overturn precedent, for example – aren’t announced until the end of the term.

Is it clear why they release these major decisions at the end of the term?

There’s been some speculation they want to wait to issue these opinions right before they leave town. Because they’re social creatures as all of us are, some speculate that they don’t want to have to discuss these cases in their social circles. But I think it’s most likely that it is a combination of workload and because these cases are more time intensive. The justices also understand the public impact these cases can have. But, ultimately, it’s not clear exactly why they do it.

The court is known for its secrecy. What’s the point of the court being so tight-lipped about its decisions?

The court is an institution that has, over time, very carefully husbanded its legitimacy in the eyes of the public[7].

The late Justice Antonin Scalia required his clerks[8] to sign an agreement respecting the privacy of the court’s deliberations. He told them that if they violated this secrecy, he would do everything he could to undermine their future careers.

The court is very careful[9] about ensuring that once it issues an opinion, it is the final opinion. Revealing any internal and potentially divisive dynamics related to the court’s decision-making process could undermine the force and effect of a Supreme Court decision.

Why do they not even say when a specific decision will be announced?

I think it’s probably difficult for them to predict the exact timing of decisions, frankly. Remember, the court’s final opinions are the result of a negotiation among the individual justices. And until they’re ready, they can’t necessarily say, “This is the day we’re going to sign off,” especially at the end of the term when many of these very important decisions are announced.

There may be negotiations and proofreading up to the very last minute. The justices no doubt appreciate that these highly important decisions are going to end up in law school textbooks. They’re going to be carefully read by journalists. And the justices are a highly professional group of individuals.