For their first 100 million years on planet Earth, our mammal ancestors relied on the cover of darkness to escape their dinosaur predators and competitors. Only after the meteor-induced mass extinction of dinosaurs[1] 66 million years ago could these nocturnal mammals explore the many wondrous opportunities available in the light of day.

Fast forward to the present, and the honeymoon in the sun may be over for mammals. They’re increasingly returning to the protection of night to avoid the Earth’s current terrifying super-predator: Homo sapiens.

My colleagues and I[2] have made the first effort to measure the global effects of human disturbance on the daily activity patterns of wildlife. In our new study[3] in the journal Science, we documented a powerful and widespread process by which mammals alter their behavior alongside people: Human disturbance is creating a more nocturnal natural world.

Many catastrophic effects of humans on wildlife communities have been well-documented: We are responsible for habitat destruction and overexploitation that have imperiled animal populations[4] around the world. However, just our presence alone can have important behavioral impacts on wildlife, even if these effects aren’t immediately apparent or easy to quantify. Many animals fear humans: We can be large, noisy, novel and dangerous. Animals often go out of their way to avoid encountering us. But it’s becoming more and more challenging for wildlife to seek out human-free spaces, as the human population grows and our footprint expands across the planet. 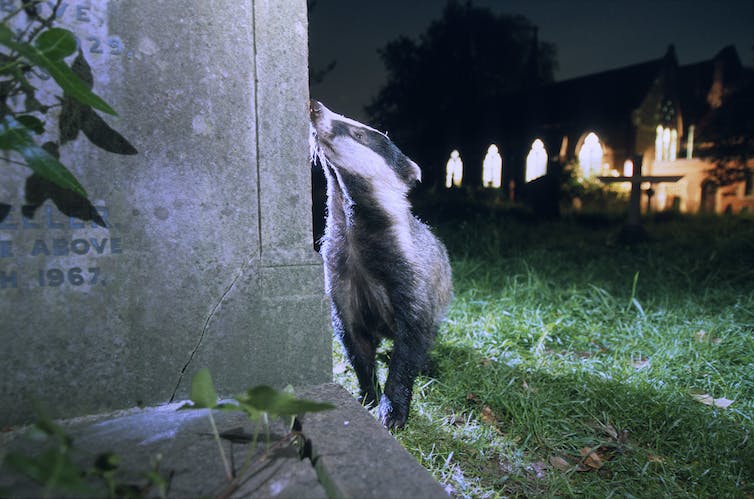 A badger explores a South London cemetery at night. Laurent Geslin. For use only with this article.

My collaborators and I noticed a striking pattern in some of our own data from research in Tanzania, Nepal and Canada: animals from impala to tigers to grizzly bears seemed to be more active at night when they were around people. Once the idea was on our radar, we began to see it throughout the published scientific literature.

It appeared to be a common global phenomenon; we set out to see just how widespread this effect was. Might animals all over the world be adjusting their daily activity patterns to avoid humans in time, given that it is becoming harder to avoid us in space?

To explore this question, we conducted a meta-analysis[5], or a study of studies. We systematically scoured the published literature for peer-reviewed journal articles, reports and theses that documented the 24-hour activity patterns of large mammals. We focused on mammals because their need for plenty of space often brings them into contact with humans, and they possess traits that allow for some flexibility in their activity.

We needed to find examples that provided data for areas or seasons of low human disturbance – that is, more natural conditions – and high human disturbance. For example, studies compared deer activity in and out of the hunting season, grizzly bear activity in areas with and without hiking, and elephant activity inside protected areas and outside among rural settlement.

Based on reported data from remote camera traps, radio collars or observations, we determined each species’ nocturnality, which we defined as the percentage of the animal’s total activity that occurred between sunset and sunrise. We then quantified the difference in nocturnality between low and high disturbance to understand how animals changed their activity patterns in response to people. 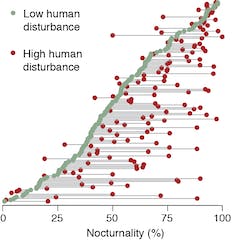 For each species, researchers compared the animals’ active periods when people are nearby to when people aren’t around. The distance between the grey and red dot pair for each animal shows how extreme the shift in nocturnality. Reprinted with permission from Gaynor et al., Science 360:1232 (2018). For use only with this article.[6]

Overall, for the 62 species in our study, mammals were 1.36 times as nocturnal in response to human disturbance[7]. An animal that naturally split its activity evenly between the day and night, for example, would increase its nighttime activity to 68 percent around people.

While we expected to find a trend toward increased wildlife nocturnality around people, we were surprised by the consistency of the results around the world. Eighty-three percent of the case studies we examined showed some increase in nocturnal activity in response to disturbance. Our finding was consistent across species, continents and habitat types. Antelope on the savanna of Zimbabwe, tapir in the Ecuadorian rainforests, bobcats in the American southwest deserts – all seemed to be doing what they could to shift their activity to the cover of darkness.

Perhaps most surprisingly, the pattern also held across different types of human disturbance, including activities such as hunting, hiking, mountain biking, and infrastructure such as roads, residential settlement and agriculture. Animals responded strongly to all activities, regardless of whether people actually posed a direct threat. It seems human presence alone is enough to disrupt their natural patterns of behavior. People may think our outdoor recreation leaves no trace, but our mere presence can have lasting consequences.

We don’t yet understand the consequences of this dramatic behavioral shift for individual animals or populations. Over millions of years, many of the animals included in our study have evolved adaptations to living in the daylight. 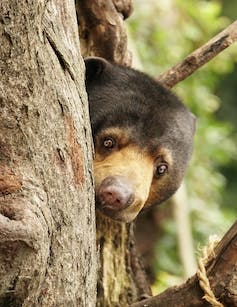 Sun bears retreat from the sunny hours when people are nearby. Hakumakuma/Shutterstock[8]

Sun bears[9], for example, are typically diurnal and sun-loving creatures; in undisturbed areas less than 20 percent of their activity occurred at the night. But they increased their nocturnality to 90 percent[10] in areas of the Sumatran forest where intensive forest research activity created a disturbance.

Such diurnally adapted animals may not be as successful at finding food, avoiding predators or communicating in the darkness, which could even reduce their survival or reproduction.

However, because our mammalian ancestors evolved under the cover of darkness in the time of the dinosaurs, most mammal species possess traits that allow for some flexibility in their activity patterns. As long as animals are able to meet their needs during the night, they may actually thrive in human-dominated landscapes by avoiding daytime direct encounters with people that could potentially be dangerous for both parties. In Nepal, for example, tigers and people share the exact same trails[11] in the forest at different times of day, reducing direct conflict between humans and these large carnivores. Dividing up the day, through what researchers call temporal partitioning, may be a mechanism by which people and wildlife can coexist on an ever more crowded planet.

An increase in nocturnality among certain species may also have far-reaching consequences for ecosystems, reshaping species interactions and cascading through food webs. In California’s Santa Cruz Mountains, coyotes are becoming more nocturnal[12] in areas with human recreation. By analyzing coyote scat, scientists have linked this behavioral change to dietary shifts from diurnal to nocturnal prey[13], with implications for small mammal communities and for competition with other predators. 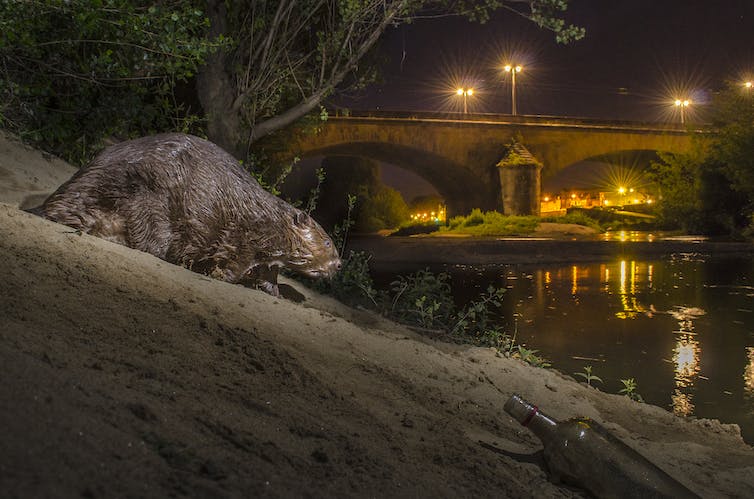 European beaver active at night in Orléans, France. Laurent Geslin. For use only with this article.[14]

Working on this study reminded me that people aren’t alone on the planet. Even if we don’t see large mammals while we’re out and about during the day, they may still be living alongside us, asleep while we are awake and vice versa. In areas where threatened species live, managers may consider restricting human activity to certain times of the day, leaving some daylight just for wildlife.

And it is likely that we need to preserve wilderness areas entirely free of human disturbance to conserve the most vulnerable and sensitive mammal species. Not all animals are willing or able to just switch to a nocturnal lifestyle around people. Those that try to avoid human disturbance entirely may be most vulnerable to the consequences of the expanding human footprint. 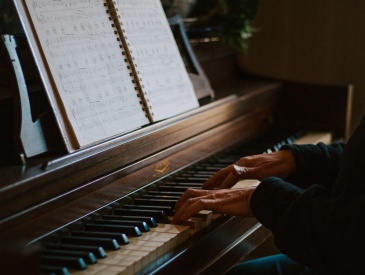 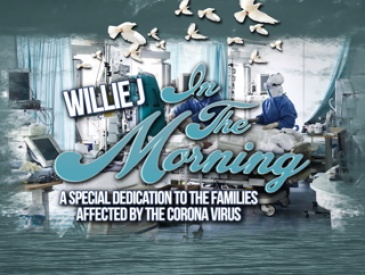 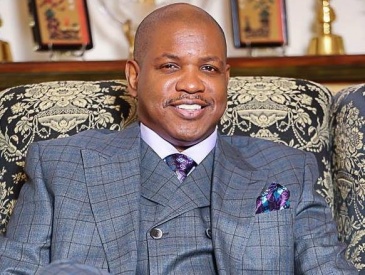 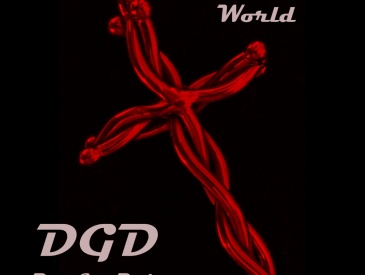 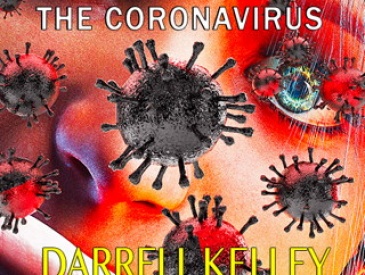 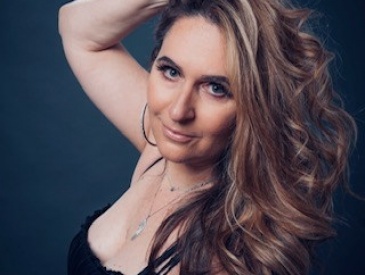 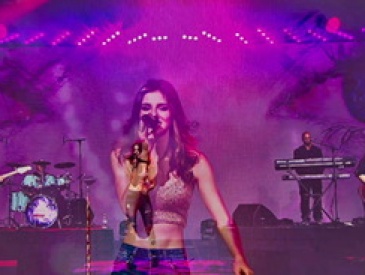 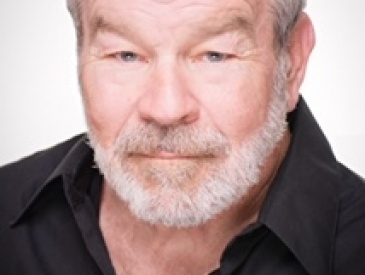 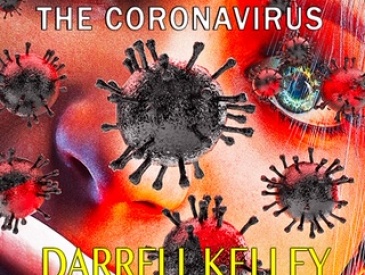 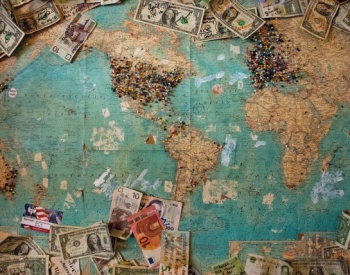 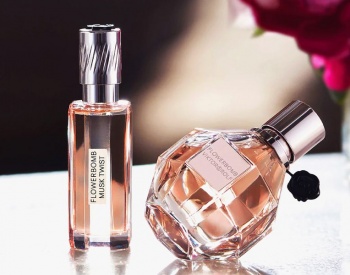