As the reference and instruction librarian[3], I’m tasked with getting to know the collection so I can exhibit parts of it and use the materials for teaching. One of the great pleasures of assessing and cataloging Watson’s collection has been learning about how comic books have changed over time. Sifting through Watson’s vast collection of 140,000-plus comics, I’m able to see the genre’s entire trajectory.

Before World War II, superheroes were all the rage. Reflecting anxieties[4] over the Great Depression, the rise of fascism and the march to war, readers yearned for mythical figures who would defend the disenfranchised and uphold liberal democratic ideals.

Once the war ended, the content of comic books started to change. Superheroes gradually fell out of fashion and a proliferation of genres emerged. Some, such as Westerns[5], offered readers a nostalgic fantasy of a pre-industrial America. Others, like true crime[6] and horror[7], hooked readers with their lurid tales, while science fiction comics[8] appealed to the wonders of technological advancement and trepidation about where it might lead us.

But there was also a brief period when the medium was dominated by the romance genre.

Grounded in artistic and narrative realism, romance comics were remarkably different from their superhero and sci-fi peers. While the post-war popularity of romance comics only lasted a few years, these love stories ended up actually having a strong influence on other genres.

Though today they are most famous for creating “Captain America,” the creative duo of Joe Simon and Jack Kirby launched the romance comic book genre in 1947[9] with the publication of a series called “Young Romance.”

But a comic dedicated to telling romantic stories hadn’t been done before. With the phrase “Designed for the More Adult Readers of Comics” printed on the cover[11], Simon and Kirby signaled a deliberate shift in expectations of what a comic could be.

While most scholars have argued that romance comics tend to reinforce conservative values[12] – making marriage the ultimate goal for women and placing family and middle-class stability on a pedestal – the real pleasure of reading these books came from the mildly scandalous behavior of their characters and the untoward plots that the narratives were ostensibly warning against. With titles like “I Was a Pick-Up!,” “The Farmer’s Wife” and “The Plight of the Suspicious Bridegroom,” “Young Romance” and its sister titles quickly sold out of their original print runs[13] and began outselling other comics genres. 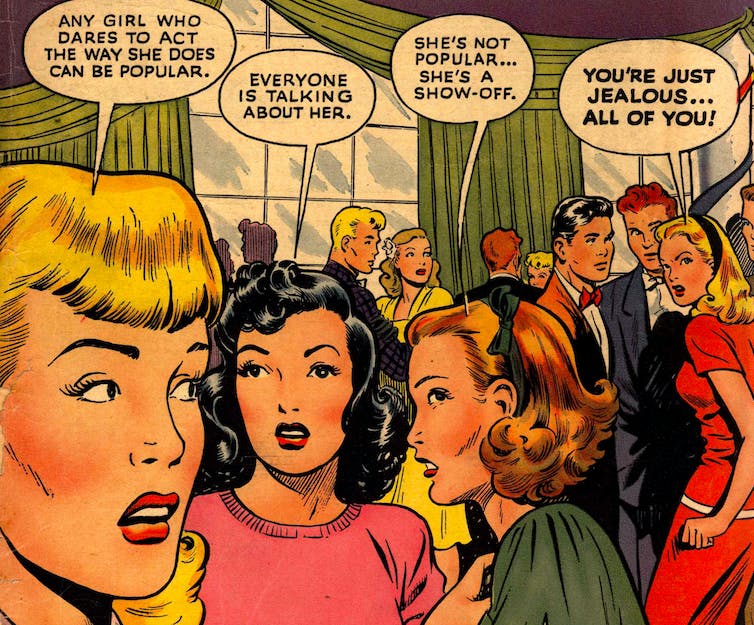 Other publishers noticed the popularity of the genre and followed suit with their own romance titles, most of which closely followed Simon and Kirby’s style and structure. By 1950[14], about 1 in 5 of all comic books were romance comics, with almost 150 romance titles being sold by over 20 publishers.

The rage for all things romance was so sudden that publishers eager to take advantage of the new market altered titles and even content in order to save on second-class postage permits[15]. Second-class or periodical postage is a reduced rate that publishers can use to save on the cost of mailing to recipients. Rather than apply for new permits every time they tested a new title, comics publishers would simply alter a failing title while retaining the issue numbering in order to keep using the preexisting permit. To comics historians, this is a telltale sign that the industry is undergoing a sudden change.

One striking example of this is when comics publisher Fawcett ended its failing superhero comic “Captain Midnight[16]” in 1948 with issue #67 and launched its new title, “Sweethearts[17],” in issue #68. In this case, the death of a superhero comic became the birth of a romance comic. 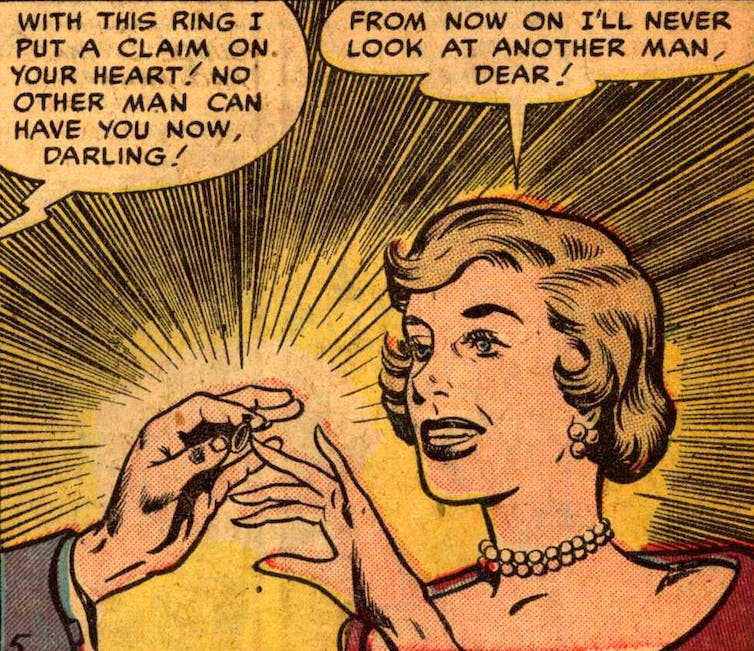 With so many new titles flooding newsstands and department stores, the bubble was bound to burst. In what comic book historian Michelle Nolan has dubbed[18] “the love glut,” 1950 and 1951 witnessed a rapid boom and bust of the romance genre. Many romance titles were canceled by the mid-1950s, even as stalwarts of the genre, such as “Young Romance,” remained in print into the mid-1970s.

There was the brief popularity of the sub-genre of gothic romance comics in the 1970s – series with names like “The Sinister House of Secret Love” and “The Dark Mansion of Forbidden Love.” But romance comics would never approach their brief, postwar peak. 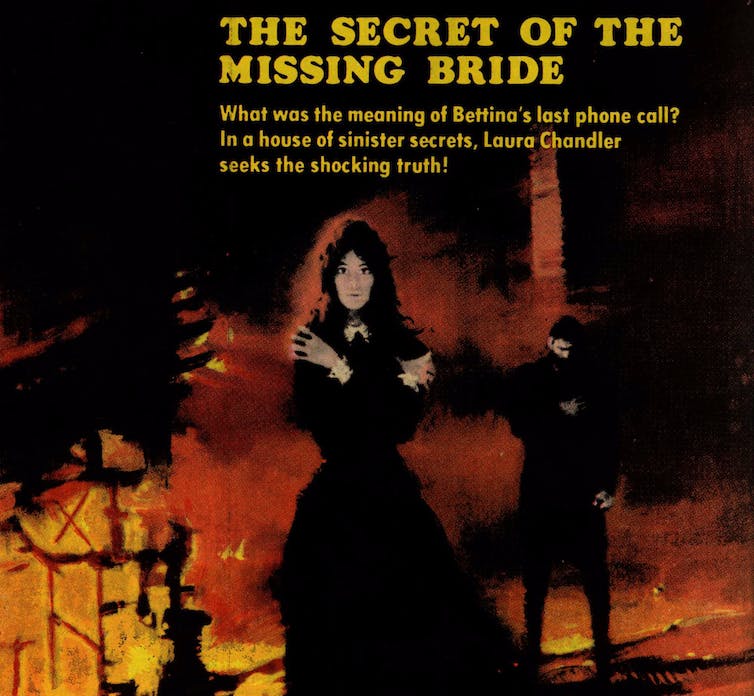 Gothic romances – like this issue of ‘The Dark Mansion of Forbidden Love’ – had a brief run in the 1970s. Gary Lee Watson Comic Book Collection, Irvin Department of Rare Books and Special Collections, University of South Carolina Libraries, Author provided

A brief boom, an enduring influence

Among collectors, issues of romance comics are less sought after than those of other genres. For this reason, they tend to go under the radar.

Romance comics, however, featured work by pioneering artists like Lily Renée[19] and Matt Baker[20], both of whom worked on first issue of “Teen-Age Romances” in 1949.

Baker is the first-known black artist to work in the comic book industry and Renée was one of comics’ first female artists. Prior to working on “Teen-Age Romances,” they both drew “good girl art[21]” – a set of artistic tropes borrowed from pinups and pulp magazines – for several titles. Their work in both genres exemplifies how earlier pulp magazine themes of desire and seduction could readily be applied to newer genres. 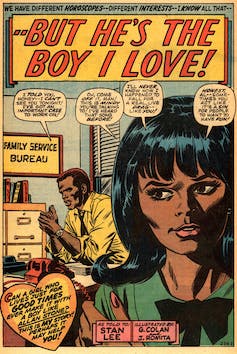 After the “love glut,” sub-genre mashups nonetheless emerged. For example, cowboy romances[22] were briefly popular. Later, in response to the civil rights movement, Marvel published the 1970 story “But He’s the Boy I Love[23],” which was the first story in a romance comic to feature African-American characters since Fawcett’s three-issue run of “Negro Romance[24]” in 1950.

Even after romance comics largely fell out of fashion, the genre’s visual tropes and narrative themes became more prevalent during what’s known as the “Silver Age[25],” a superhero revival that lasted from 1956 to 1970. Titles such as “Superman’s Girl Friend Lois Lane” often borrowed heavily from romance for their plots to generate intrigue and tension in the hopes of driving up sales.

Issue 89, in which Lois marries Bruce Wayne, is a prime example of such marketing techniques. Issues such as these were often situated as “what if” narratives that offered readers speculative story lines, such as “What if Lois Lane married Bruce Wayne?” Though they’re generally thought of as separate from the superhero canon, these love stories show that comic book writers had internalized the main narrative techniques of romance comics even if the genre itself was in decline.

But other comics didn’t merely use romantic themes for the occasional gimmick issue. Instead, they made the love lives of their characters a central plot point and a fundamental aspect of their characters’ identities. Comics such as the “Fantastic Four” and the “X-Men” rely heavily on the heated emotions and jealousies found in group dynamics and love triangles.

Take Wolverine. Presumably tough and stoic, he’s so enamored of Jean Grey – and so envious of her love interest, Scott Summers – that you could argue that unrequited love is one of his primary motivations throughout the series.

Thanks to romance comics, even stoic superheroes got bitten by the love bug.

[You’re smart and curious about the world. So are The Conversation’s authors and editors. You can get our highlights each weekend[26].] 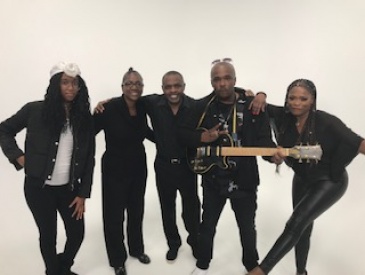 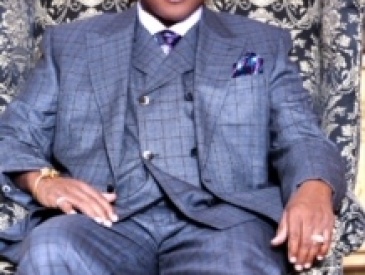 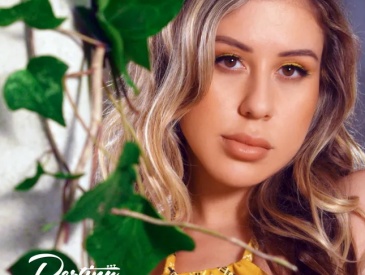